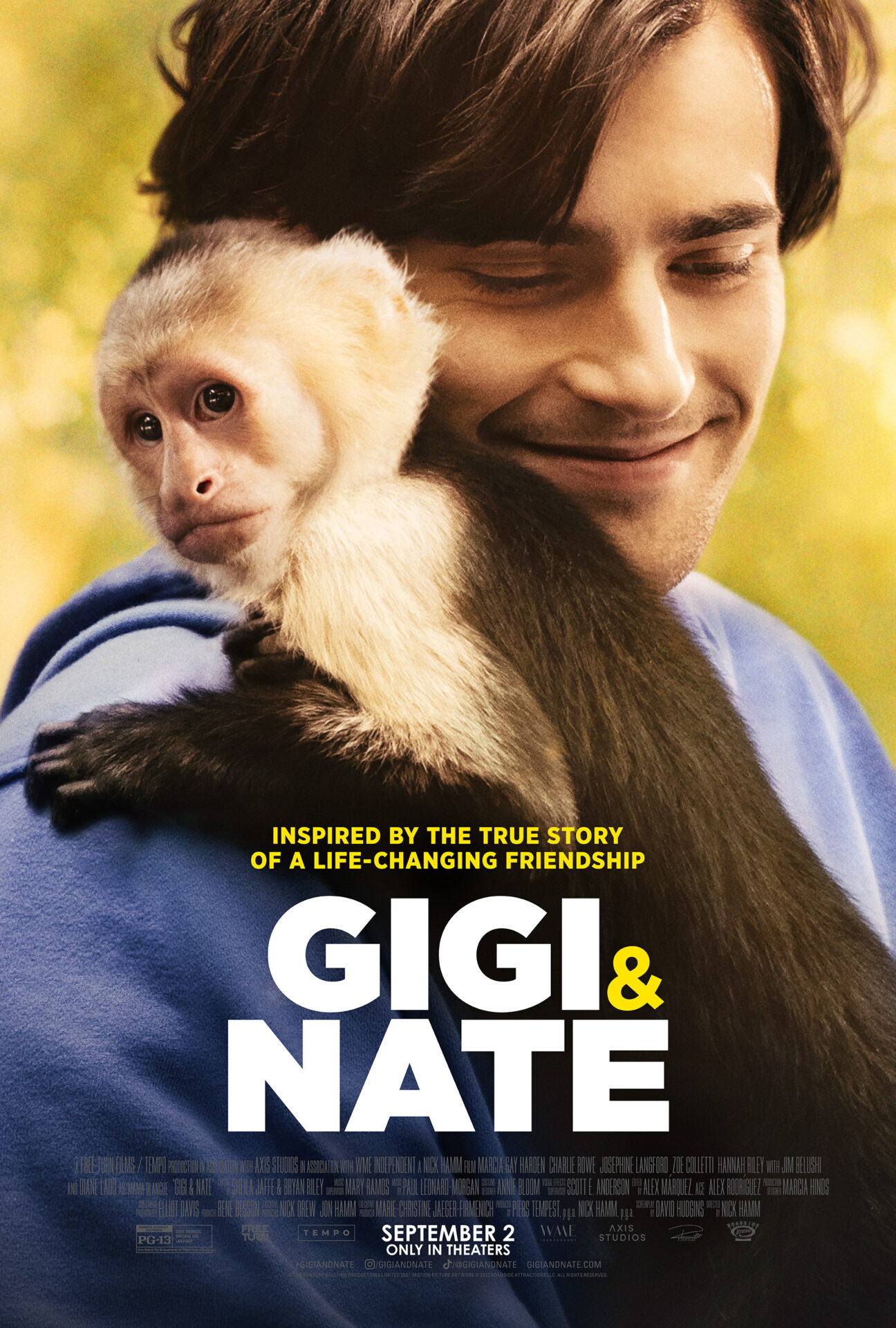 GIGI & NATE is a life-affirming drama of a young man whose life changes after an accident. After Nate in college gets water in his brain from a cliff jump, he gets meningitis and ends up a quadriplegic. His family is rallying to take care of him. Nate’s mother decides to get him a little service monkey named Gigi. Just as Nate and Gigi’s bond is forming, an animal activist calls on the government to ban these types of service monkeys.

GIGI & NATE is a well made and entertaining movie. It makes good use of a limited budget. GIGI & NATE has a strong Christian and pro-family worldview with prayers and service-to-others themes. The film shows a family’s love for a sick family member and caring for him amid difficulties. The film contains commentary supporting a smaller government, as the government interferes with Nate’s ownership of Gigi. There is a scene where Nate goes to a party and drinks, but this is reprimanded. GIGI & NATE also has a lot of light foul language. Thus, MOVIEGUIDE® advises caution for older children.

A strong Christian, moral and pro-family worldview includes two prayer scenes, images of a Christian cross, and emphasizes family and the love and care of others, with a plot on overregulation of the government

GIGI & NATE is a life-affirming drama about a young man whose life changes completely after an accident leaves him a quadriplegic, with a service monkey to help him. GIGI & NATE is a well-made and entertaining film with a strong Christian and pro-family worldview emphasizing prayer and caring for others, but it has plenty of light curses and a party scene.

Nate enjoyed the summer before his freshman year of college. When he dives from a cliff at a very great distance, he comes out of the water walking towards his house on the lake. Later that night, Nate has a very strange feeling and ends up having a seizure on the ground. His family rushes him to the hospital, where medical staff discover that Nate has water in his brain, which has caused swelling. They transport Nate by helicopter to a larger hospital, which tells the family that Nate has meningitis and may not live. As his sister sits next to him, she begs him to live.

Months pass and we discover that Nate lived, but is now a quadriplegic. His life is completely different now, and he’s depressed and feeling hopeless. Nate’s mother, Claire, decides to take Nate out for a service animal, thinking it will cheer him up.

Nate comes home with a monkey as a service animal. This little monkey, whom they name Gigi, is nervous about his new surroundings and takes a long time to get out of his cage. Gigi begins observing everyone helping Nate, including his physical therapist, nurse, and mother.

Amazingly, Gigi begins to help Nate with his fine motor skills and he begins to improve. Gigi and Nate built a deep connection, and she helped him with her joy.

When Nate takes Gigi to the supermarket, an animal advocate is there and tells them the monkey can’t be in the supermarket. Soon the animal activist finds trouble with Gigi and Nate and decides to ask them to be together saying that the type of monkey that Gigi is shouldn’t be used as a service animal. Now Nate must fight any regulations that may be imposed on Gigi.

GIGI & NATE is a well made and entertaining film. It makes good use of a limited budget and contains heartwarming good times and big risk.

GIGI & NATE has a strong Christian and pro-family worldview with prayers and service-to-others themes. The film is about a family’s love for a family member and caring for him in the midst of hardship. The film also contains commentary supporting a smaller government, as the government interferes with Nate’s ownership of Gigi. There is a scene where Nate goes to a party and drinks, but this is reprimanded. GIGI & NATE also has a lot of light foul language. Thus, MOVIEGUIDE® advises caution for older children.