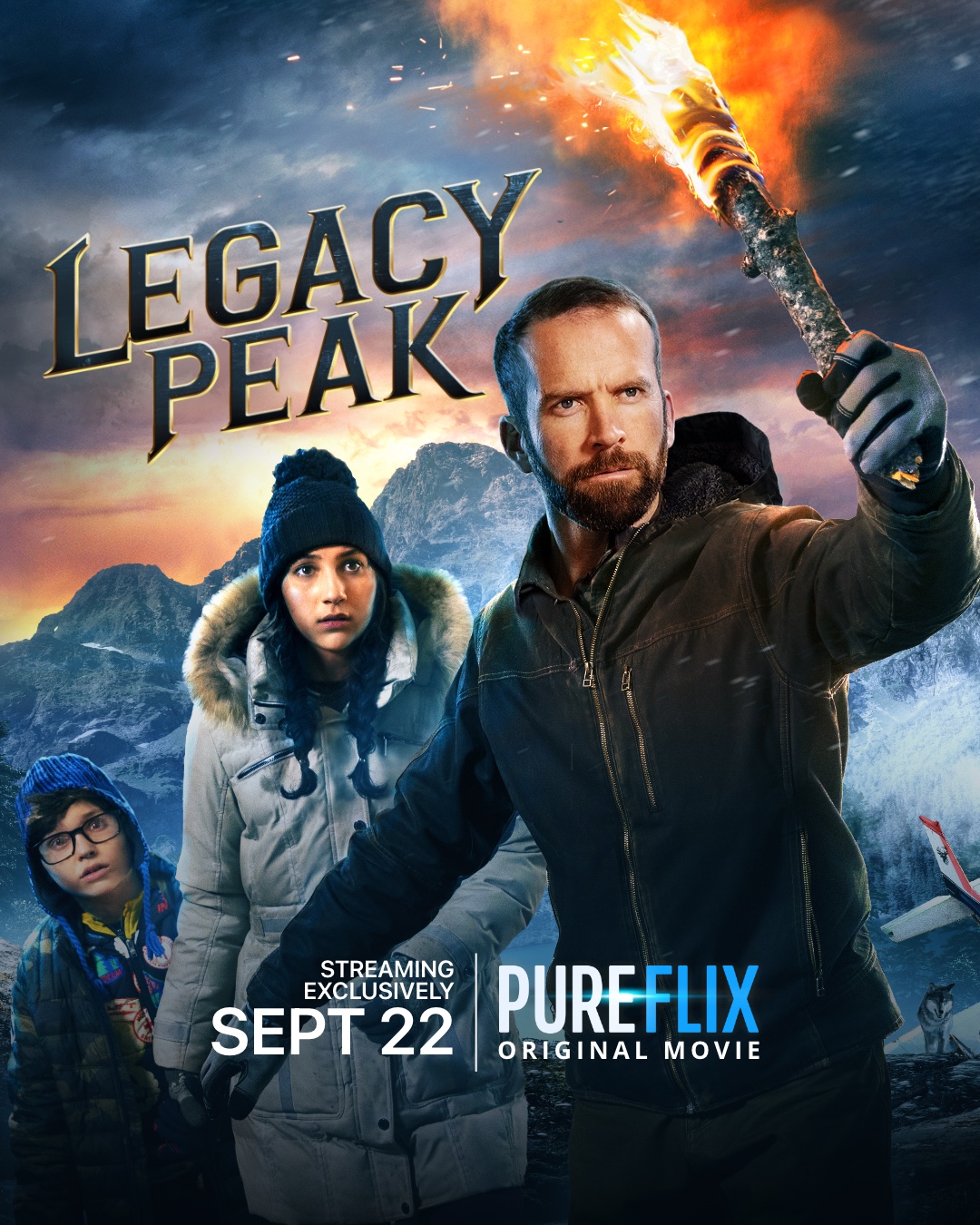 LEGACY PEAK is an adventure movie streaming on PureFlix. FAST & FURIOUS actor Lucas Black stars as Jason, who wants to bond with his girlfriend’s two kids before he proposes on Christmas Eve. He plans to take the children, Ben and his older sister Sam, to their grandparents while his girlfriend finishes work before the holidays. However, after swerving, a flock of birds hit the plane and Jason, Ben and Sam are stranded in the wild. Will they be able to unite and survive? Or will emotional strains, wolf packs and extreme weather take over?

LEGACY PEAK is a well shot and well acted film. Despite the pacing issues, the film’s intensity increases during the second half and viewers will become more engaged with the story and characters. LEGACY PEAK has a strong Christian and moral worldview. He defends God, prayer, faith, the scriptures and fatherhood. On several occasions, Jason relies on the strength of God to keep the children safe. MOVIEGUIDE® advises a little caution for young, sensitive viewers due to the intense peril and violent struggle with fearsome wolves in LEGACY PEAK.

Very strong Christian, moral and biblical worldview with many Christian elements, the hero prays to God several times throughout the film, the hero says that despite his difficult past, his life changed when he knew the Lord, the hero’s knife (a gift from his late father) has a bible verse inscribed on it, in the hero’s moving final speech he quotes scripture, the film is very pro-fatherhood and explores how God is our perfect father, even when our circumstances are bad

No obscenities or profanity, use of “shit”, use of “Oh my God”, and some minor name-calling like “idiot

Although there is no blood, an intense and violent scene occurs where the man defends the children against an attacking wolf, one wolf is killed by falling rocks, another is stabbed and killed after biting a man’s arm, another wolf is killed after a man shoots him with a gun (although these scenes are intense, they are not graphic, but the wolves let out a moan when they die, this which might upset some viewers), a boy scratches his hand in a plane crash, a girl falls into freezing water and nearly gets hypothermia

No smoking or drugs;

There are many conversations about the death of parents, the foster family, and absent parents, but these situations are redeemed when God is mentioned as the ultimate example of fatherhood.

LEGACY PEAK is a new Affirm Original adventure film streaming on Pure Flix, about a man who wants to bond with his girlfriend’s kids before proposing on Christmas Eve, but, when their plane crashes in the desert on the way to a cabin, Jason must protect his future children from the imminent dangers in nature. LEGACY PEAK is a well-made film, with an excellent performance from FAST & FURIOUS actor Lucas Black, a thrilling second half, and a strong Christian and moral worldview that champions God, prayer, faith, scripture, and justice. paternity.

The film follows Jason, played by Black, as he prepares for a Christmas with his girlfriend’s two children, Ben and Sam, and his parents in a remote cabin. Jason is overjoyed at the opportunity to bond with Ben and Sam and buys them an array of gifts. He also plans, with his father’s blessing, to propose to his girlfriend during the trip. Jason plans to leave early with Ben and Sam, especially since Ben is excited to fly, and meet the children’s mother at the cabin in a few days.

Despite Ben’s excitement, Sam can’t help but think that Jason is only here to earn “brownie points” with their mother. Sam also can’t help but compare Jason to their estranged father, whom both children loved.

The unlikely trio embarked on the three-hour plane journey, where Jason points out several landmarks, including Legacy Peak, a giant mountain deep in the wilderness. Ben asks Jason if they can get closer to the mountain. At first, Jason isn’t sure if getting out of flight path is a bad idea, but in an effort to bond with Ben, they fly closer to the mountain.

Their incredible views are interrupted when their plane is hit by a flock of birds, forcing Jason to make an emergency landing. Luckily, there is a clearing that allows for a safe landing. Apart from a few scratches, they are all safe and sound. However, Jason realizes that their problems are just beginning. The plane is unusable and they are on a three-day trek from the cabin.

After some deliberation, Jason hatches a plan to traverse the wilderness to the cabin with Ben and Sam. At first, the journey is exciting. However, Jason soon realizes that it will take more than presents for Sam to warm up. When Sam discovers the ring, his skepticism turns to anger. But, with a pack of wolves hot on their trail, a rising storm, and a lack of food and shelter, Jason, Sam, and Ben must find a way to work together if they are to survive.

LEGACY PEAK is a well filmed and well acted film. Despite some pacing issues, by the end of the film, the intensity ramps up and the audience becomes more fully and easily engaged with the characters. Lucas Black gives a great performance as Jason, which elevates his co-stars’ already strong performances.

The most commendable thing about LEGACY PEAK, however, is its strong Christian and moral worldview that champions God, prayer, faith, scripture, and fatherhood. Jason recites verses and prays throughout the film. Although he is not perfect and has to learn how to parent under certain stressful conditions, he relies on God and sacrifices himself for the children’s safety. Due to some intense scenes of peril, including a bloodless fight with wolves, MOVIEGUIDE® advises a little caution for more sensitive younger viewers.