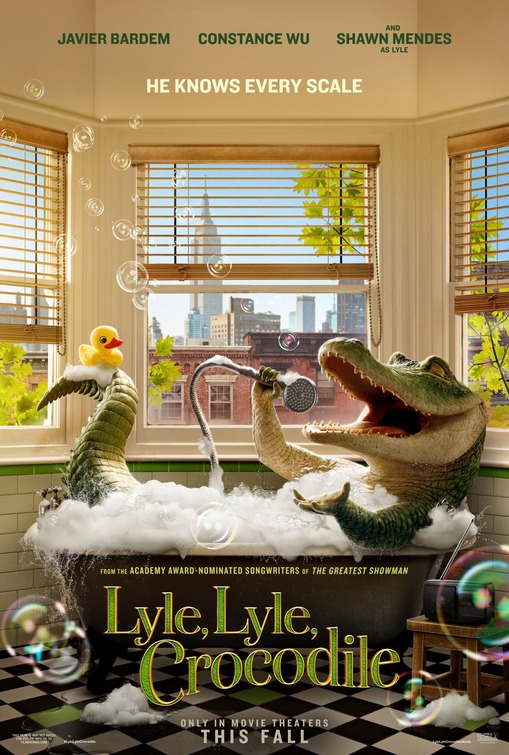 LYLE, LYLE CROCODILE is a fun comedy about a talking, singing crocodile and a college boy. Josh is nervous because he’s moved to New York and is going to a new school. One night, he hears noises in the attic and finds a crocodile trying to eat the neighbor’s cat. Josh catches the crocodile and he finds himself in a dark alley where a man tries to steal his phone. The crocodile protects Josh, which causes Josh to start trusting him. Living in the attic, the crocodile, named Lyle, strikes up an unlikely friendship with Josh. Will Josh’s grumpy neighbor find out about Lyle and kick the family out?

LYLE, LYLE CROCODILE has a strong moral worldview with many positive themes, but it can be scary for little kids. The main character of the film develops confidence and courage and learns to love someone other than himself. The film is well done, with good acting, but there isn’t much danger for much of the story. Overall, though, viewers will find LYLE, LYLE CROCODILE funny and enjoyable.

A strong moral worldview with some redeeming elements encourages thinking of others above self, mentions miracle, and has a positive example of family and marriage, plus there are mentions of magic, but as illusions

No obscenities but four mild profanities

A character lies and cheats but is discovered and apologizes.

LYLE, LYLE CROCODILE is a fun comedy about a singing crocodile who defends a middle schooler named Josh, who sees the good in the talking reptile and builds an unlikely friendship with him. LYLE, LYLE CROCODILE is funny and enjoyable and has a strong moral worldview with lots of positive themes, but it could use a little more danger, and some scenes can be scary for little kids.

Josh just moved to New York and isn’t happy about it. When he goes to his new school in the morning, he is anxious and lacks confidence. Every night he hears a noise in the attic that he is curious about. When he goes up to the attic, he finds a crocodile. The crocodile eats the neighbor’s cat that Josh is holding and runs away. Josh runs after the crocodile, knowing the neighbor will be furious if his cat dies. As Josh chases the crocodile, he finds himself in a dark alley, where a man tries to take his phone. The crocodile defends Josh and saves him from the man. After that, Josh and the Crocodile become friends and Josh starts calling him Lyle.

Josh starts doing things with Lyle that he wouldn’t usually do, but Lyle helps Josh find the confidence and courage. The two bond by doing things like dumpster diving, singing on the roof, and having fun together.

One day, however, Josh’s mother sees Lyle and thinks they should get rid of him. Josh’s mother was also a bit uncomfortable, feeling lonely. When she returns home after dropping Josh off from school, Lyle befriends her while singing about baking and cooking. Together they form a bond, but will they manage to keep Lyle even if their neighbor threatens to have them kicked out for loud noises? And what if Josh’s dad finds out?

LYLE, LYLE CROCODILE has a strong moral worldview about loving others, friendship, and thinking of others above yourself. The main character learns to love others and builds up his confidence and courage. The film also makes reference to miracles. One Person is a bit of a sleazy character, but he apologizes for his actions. Also, some scenes could be very scary for much younger children when a crocodile starts growling.

LYLE, LYLE CROCODILE is a well made and entertaining film. Parts of the movie are safe, but viewers will still be entertained. The CGI animation in the film is excellent. Also, the main character does a great job as an actor.