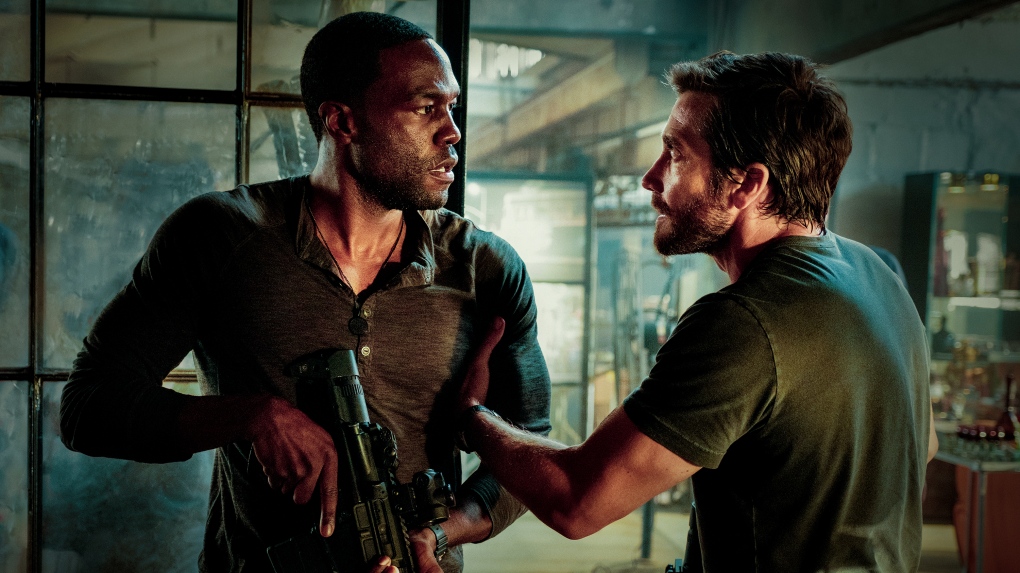 This image released by Universal Pictures shows Jake Gyllenhaal, left, and Yahya Abdul-Mateen II in a scene from “Ambulance.” (Universal images via AP)

“Transformers” director Michael Bay’s movies are so distinctive that the internet has coined a new term to describe his pedal-to-metal action style: Bayhem. His latest film, the chase movie “Ambulance,” starring Yahya Abdul-Mateen II and Jake Gyllenhaal, and now playing in theaters, falls in line. He keeps his foot on the accelerator like Bayhem.

Decorated veteran Will (Abdul-Mateen II) is in desperate need of money. His wife needs surgery, but the boxes are dry. To raise money, he reluctantly asks his foster brother and career criminal Danny (Gyllenhaal) if he can help.

Turns out Danny can help, if Will is willing to bend the rules to get the money.

A lot of money.

Danny plans a bank robbery with an estimated bounty of US$32 million. “I need an extra man,” Danny said. Will isn’t sure, but Danny is persuasive. “Did I ever make you do something I couldn’t get you out of?”

The bank robbery goes off without a hitch, but the getaway is tough. As things fall apart, they hijack an ambulance. The problem is that the ambulance is transporting an injured policeman (Jackson White) and a paramedic (Eiza González). With the police hot on their heels, they lead the ambulance on a high-speed chase through the streets of Los Angeles. “We’re not the bad guys,” Danny says. “We’re just trying to get home.”

The stakes are life and death. Cue the Bayhem.

“Ambulance” is not a heist movie. Bay takes the excitement out of the setup and execution of the sequence, but it’s a getaway movie with an interesting family dynamic between Danny and Will.

Gyllenhaal’s performance as a charismatic, sociopathic older brother is as amped up as the film itself, which is to say, it goes pedal-to-metal all the way.

Bay’s relentless camera is in constant motion. It zooms in, caresses the actor’s faces in extreme close-ups, flies up and down the sides of buildings and, of course, cruises alongside the ambulance as it zips through the streets of Los Angeles. The camerawork and editing is so fast, it’s like Bay had her finger on the fast-forward button the whole time.

If you get motion sickness, you might want to pack some Gravol with your popcorn.

If “Ambulance” was music, it would be a guitar solo by Yngwie Malmsteen. Fast and heavy, it knocks you down with technical skill, but doesn’t commit much more than that. There’s no sense of rhythm, it’s all a forward momentum. As Danny and Will repeatedly say, “We’re a powerhouse. We don’t stop,” but sometimes hitting the brake can give viewers and cast a chance to catch their collective breath.

“Ambulance” is Bayhem raw and pure. From the frantic editing to the characters, all of whom talk like they’re in a Michael Bay action movie, and the anxiety-inducing soundtrack, this is Bayhem frantic with all the good and bad that entails. 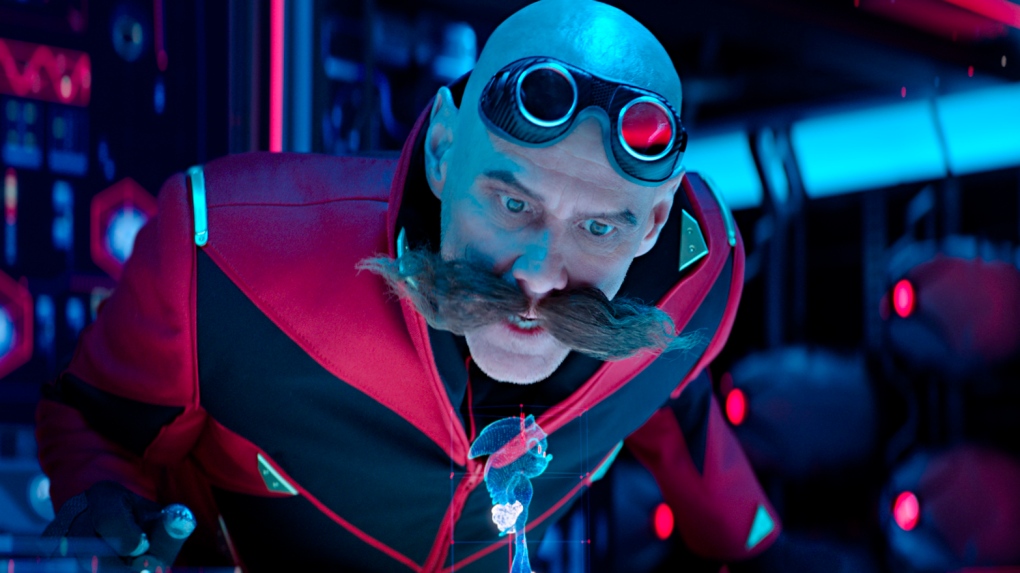 The bright blue alien hedgehog Sonic returns to theaters with the imaginative title “Sonic the Hedgehog 2”, a Sega sequel to the highest-grossing video game movie of all time.

At the start of the film, Sonic (voiced by Ben Schwartz), a hedgehog whose lightning-fast reflexes and ability to run faster than the speed of sound helped him save the world on numerous occasions, lives with his “adoptive parents,” Montana police officer Tom (James Marsden) and his vet wife Maddie (Tika Sumpter).

When Tom and Maddie go on vacation to Hawaii, Sonic is on his own. This opens the door for the hedgehog’s nemesis, the villainous Dr. Robotnik (Jim Carrey) to return with the anteater sidekick Knuckles (voiced by Idris Elba). Robotnik is still sore from his exile on a distant planet, but has returned with a thirst for exact revenge on the spiny blue mammal that put him there and a plan to take over the world.

“Since I left,” he says, “I have discovered the source of ultimate power.”

This power comes from a mystical emerald that has the power to destroy civilizations. To save the world, Sonic teams up with Tails (voiced by Colleen O’Shaughnessey), a two-tailed yellow fox who appears through a magical portal.

Sonic’s plan to make sure Robotnik doesn’t destroy the world? “Step one, light taunts,” he says. “Second step? I have no idea.”

Plan or no plan, Sonic’s tenacity could save the day.

“You forgot one,” Sonic replies. “Unstoppable.”

As far as the story goes, “Sonic the Hedgehog 2” is about as imaginative as its title. A standard world-saving video game story with an unusual amount of CGI, it doesn’t blaze new trails, but fun performances – both live and in CGI – keep things dynamic for most of the two hours. a bit too long. walking time.

Sonic is the star, heart and soul of the franchise, but it’s Jim Carrey who steals the show with an over-the-top performance in search of a new high. It’s a big cartoon job that brings an organic twist to an overload of computer-generated animations.

“Sonic the Hedgehog 2” is a family movie for video game fans, comprised of a series of large, noisy sets that intertwine to entertain the eye while conveying messages about the importance of family and teamwork. 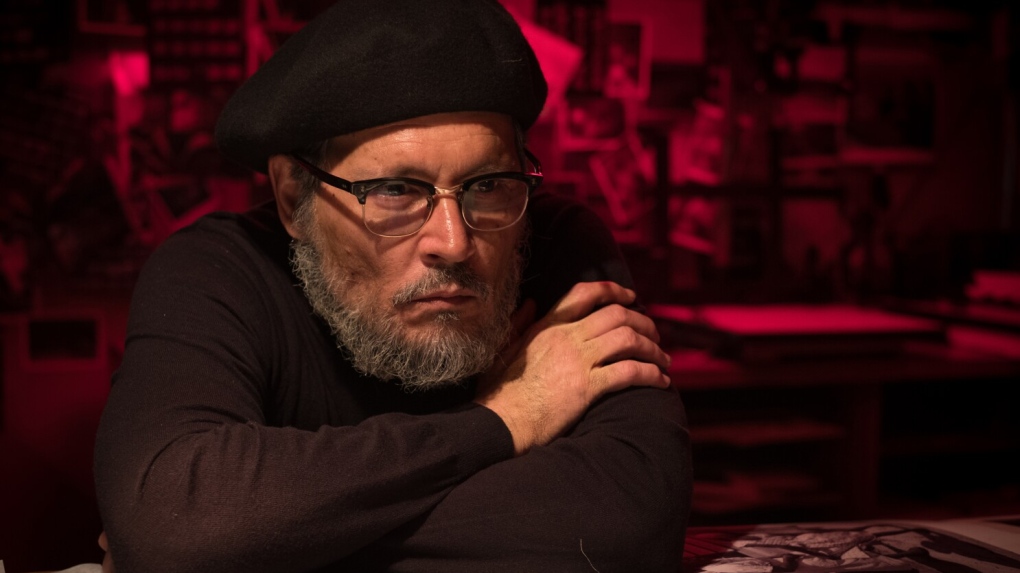 “Minamata” is a mixture of several different things. The story of famed “Life” photojournalist W. Eugene Smith as he documented the effects of toxic mercury poisoning in Japan is part biopic and part expose of corporate malfeasance, with just a hint of ” Fear and Loathing in Las Vegas” added for color.

The story begins in 1971 in New York. Smith (Johnny Depp) is at the end of a legendary career. His reclusive and erratic behavior has eroded his relationship with “Life” editor Robert Hayes (Bill Nighy) and his years as a World War II photographer haunt his memory.

Aileen (Minami), translator for Fujifilm, offers him to go to Japan to testify and document the effects of mercury pollution in the city of Minamata. For more than a decade, residents have suffered from a neurological disease caused by mercury poisoning, the result of toxic waste dumped into Minamata Bay from the Chisso chemical plant. Aileen wants the eyes of the world to focus on the problem.

The gruff Smith is initially reluctant, but his growing fondness for Aileen, a “Life” mission, and his own sense of journalistic integrity change his mind. The resulting journey and story transform both Smith and the perception of the situation in Minamata.

The long-delayed “Minamata” – which premiered at the Berlin International Film Festival in February 2020 – is an uneven film anchored by a rock-solid performance from Johnny Depp. He humanizes Curt Smith, charting an arc of redemption for the character as he atones for past transgressions by applying his art to making the world a better place for the people of Minamata. His torment is made clear in a discourse on the old belief that a photograph steals the soul of its subject. “What’s left in the fine print,” he says, “is that it can also take a piece of the photographer’s soul.”

It is a work of maturity, without a trace of Captain Jack Sparrow. A flash of Hunter S. Thompson culminates in meth abuse, alcohol, and a general disregard for the niceties of being respectful to his editor, but overall Depp digs deep and brings a raw mix of charm and of sympathy.

Depp shines in a movie that walks a well-worn path. Stories of activism against corporate malfeasance tend to follow a similar trajectory, and “Minamata” is no different. It hits the familiar beats of corporate insensitivity, but offers something new in stunning recreations of Smith’s photos, especially “Tomoko in her bath”, the most famous image in the portfolio.

“Minamata” takes liberties with historical timelines, but it’s not a documentary, it’s a dramatic recreation of Smith’s call to arms, and as such delivers a compelling, if familiar, story.