In the 1930s, the real, or Muggle, world is preparing for World War II. In the wizarding world, a different kind of battle is brewing. Gellert Grindelwald (Mikkelsen), dark wizard and former love interest of Albus Dumbledore (Jude Law), returns after creating global chaos with a renewed belief in wizarding superiority and a plan to create a new wizarding world order.

Cleared of his crimes by the International Confederation of Wizards (ICW), Grindelwald’s first step towards world domination comes with a plan to steal the election (ICW) and take control. He wants to burn down the muggle world. “There’s nothing you can do to stop me,” he told his former lover Dumbledore.

The stakes are high. Dumbledore thinks it’s the biggest threat to the wizarding and muggle worlds in a century. “Things that seem unimaginable today,” he says, “will seem inevitable tomorrow.”

Politics in the wizarding world, it seems, is just as tense as it is in ours.

If you’re going to see “Fantastic Beasts: The Secrets of Dumbledore” for a magical Harry Potter-esque fix, you’re in luck. The film has spectacular visuals that bring the wizarding world to life, mystical creatures, like cute dragons that can identify the pure heart, killer books, and a suitcase that grows legs and walks.

It’s filled with CGI wonder, but so loaded with effects that the characters play second fiddle to the bits and bytes. It’s high-end work but after a while it gets stuffy. You crave something organic, but this is the wizarding world and it’s all just an illusion.

The story has an old-school action-adventure feel, but like the CGI, it feels overdone. The highlights are enormous, accompanied by a swelling orchestral score. But even the little moments are great. A simple tale of world domination is padded and coaxed into a sprawling two hour and twenty minute span, populated by an awful lot of characters, most of whom don’t have much to do. 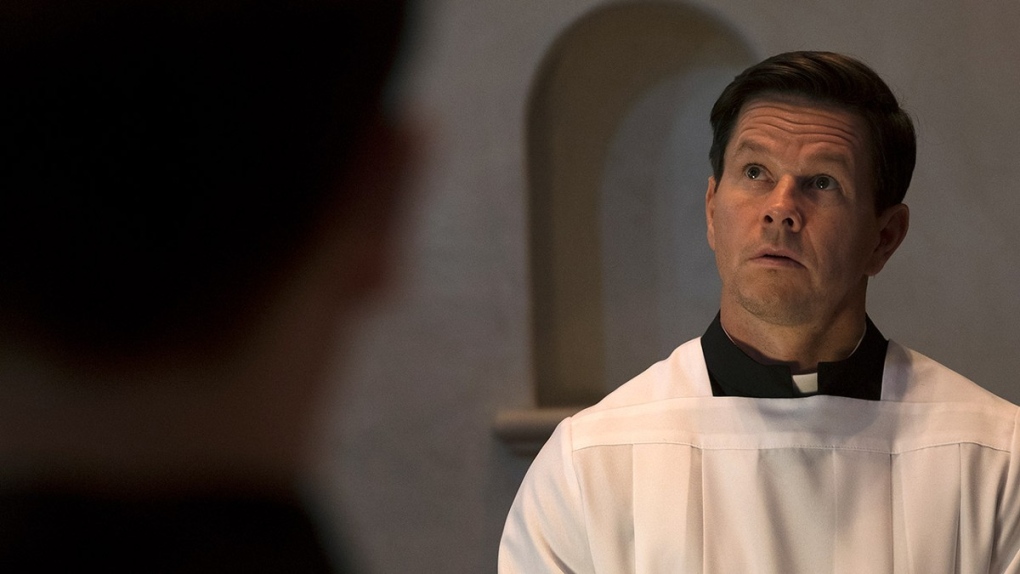 This image from Sony Pictures shows Mark Wahlberg as Stuart Long in a scene from “Father Stu.” (Sony pictures)

‘Father Stu,’ an inspiring new film from Mark Wahlberg, now in theaters, is the unlikely but true story of a tough-mouthed, tough-mouthed boxer whose path to redemption begins by way of the Catholic Church.

When we first meet Stuart Long (Wahlberg), he’s an amateur boxer with visions of the big time. He’s good, but not good enough to turn pro, as his mother (Jacki Weaver) likes to point out. “Don’t be careless in your life,” she says. “You are the age where most people pack their bags.”

He’s an angry guy. Angry with his deadbeat dad (Mel Gibson). Angry at his little brother who died young. Angry with himself and the world.

He’s a dirty drunk with a hot temper, but when a health problem forces him to retire from the ring, he sets his eyes on Hollywood. “I’ll cash in my face,” he said. “Not my fists.”

A good talker, he manages to get hired in a grocery store where he hopes to meet actors and directors who will give him a concert. Instead, he meets Carmen (Teresa Ruiz), a devout Catholic who reluctantly begins dating the unpolite Stu, but only if he gets baptized. It is, as a friend put it, “as Catholic as the cross itself.”

His path to redemption begins as he helps Carmen teach Sunday school. His plain language is a hit with the kids, Carmen, and even his strict father, but it takes a drunk motorcycle accident for Stu to literally see the light and dedicate himself to church. “God saved me to show that there is a reason why I am here,” he says, announcing to Carmen his intention to become a priest.

In a life filled with dramatic twists, there’s one more in store for Stu. One that risks preventing him from realizing his dream of becoming a priest. “God is all about battling the odds,” he says, “having the strength to endure a difficult life.”

“Father Stu” has inspiration to spare. It’s a film about the healing and motivational power of religion, which many will say “Amen”, but the execution of the story feels like a movie of the week, with predictable plot points and a timeline. accelerated that packs too much in too little time.

Even at two, the pacing is shredded as director and screenwriter Rosalind Ross attempts to cover as many facets of Stu’s personality as possible. She takes the adage “everything happens for a reason” to extremes and as such the film feels rushed in some scenes, too leisurely in others, but rarely gives us the deep insight that would make the motivations resonate. by Stu.

Wahlberg, who also produced the film after hearing Stu’s story at a dinner party with a group of priests, undergoes an extreme transformation to play the character – and I’m not talking about his ridiculous mustache. His charisma shines through the weight and makeup and it’s in these scenes that he elevates Stu from the cartoonish bad boy of the first half of the film to a compelling character. It’s a shame that Ross tries to tie up some of the loose threads of the story just as the personal story really finds its humanity.

“Father Stu” comes out around Easter, so given its subject matter and messages, it would seem like a movie for the whole family, but be warned, Stu’s language is authentic, which is to say pretty steamy. throughout the duration of the film.

“Father Stu” is a film about change, about overcoming obstacles and living with purpose. Good posts everyone, it’s just a shame they’re tied to a goofy movie.

ALL MY SISTERS PAIN: 3 ½ STARS 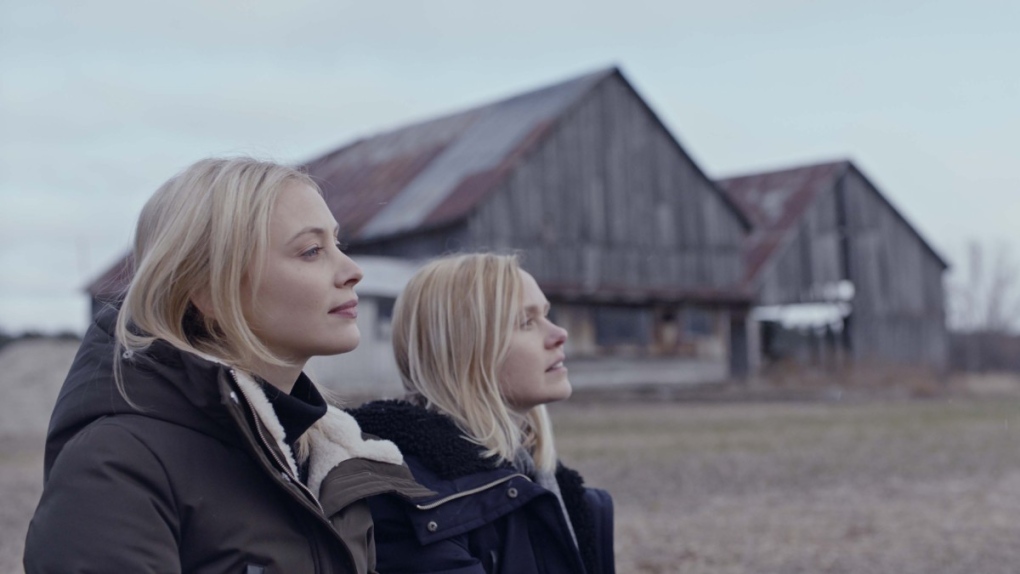 Sarah Gadon, left, and Alison Pill in a scene from ‘All My Puny Sorrows,’ directed by Michael McGowan. (Image courtesy of AMPS Productions Inc.)

As you can imagine in a film that begins with the voiceover, “In the history of mankind, has there ever been a more self-evident truth than the statement, ‘We are all going to die?’ and yet in our bones, how many of us can conceptualize that, “All My Puny Sorrows” doesn’t shy away from the delicate matter of death.

Struggling writer Yoli (Alison Pill) and concert pianist Elf (Sarah Gadon) – short for Elfrieda – are sisters who fled a strict, rural Mennonite upbringing to forge a life in the arts. A deep bond exists between them, even though their lives have taken very different paths.

Yoli is in the middle of a divorce after 16 years of marriage. As her daughter Nora (Amybeth McNulty) goes wild, Yoli wonders aloud if she’s handling things right. “Ending 16 years of monogamy with Dan triggered a kind of weird animal reaction,” she says. “To be honest, the last few months haven’t been my greatest pride.”

Elf, though internationally successful and happily married, has lost her lust for life. When she attempts suicide for the second time, Yoli comes to her side, hoping to help her sister avoid the same fate as their father Jake (Donal Logue) who killed himself when they were children, but her pleas fall through. deaf ear.

“Do you want to take me to Switzerland? asks Elf.

But Elf wants to go to an assisted suicide clinic, “where dying is legal and you don’t have to die alone.”

Writer-director Michael McGowan, adapting the novel of the same name by Miriam Toews, tells a story about grief and death that examines the purpose of life. McGowan sensitively shows how life’s decisions have echoes felt by everyone in the inner circle and beyond.

These themes are reinforced by the performances of Pill, Gadon and Mare Winningham as their beleaguered mother. The literary script often feels like the characters are speaking in carefully constructed prose, but in the mouths of these performers, the love, frustration, and acceptance of the situation is palpable. Pill and Gadon click like sisters, bringing a lifetime of love and petty feuds to the screen.

“All My Puny Sorrows” is an emotional film that embraces the totality of sad end-of-life situation, exasperation, heartbreak, and even the occasional humor.