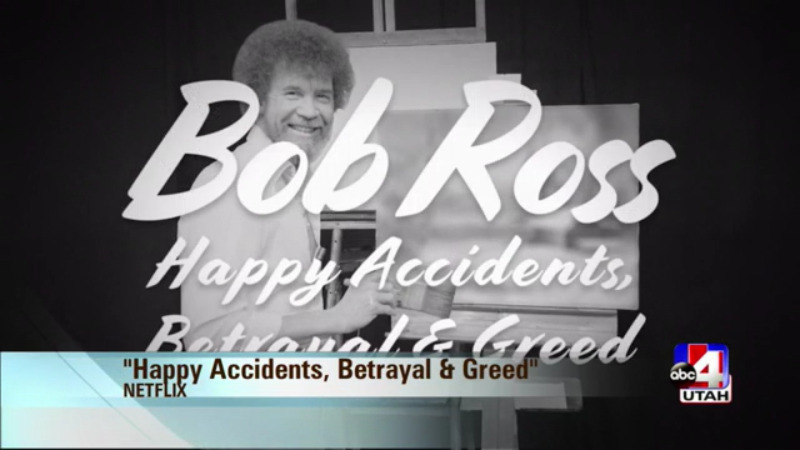 Filed: This documentary is currently unrated.

Synopsis: Bob Ross has delighted millions of people as the world’s most famous art teacher. But a battle for his business empire has cast a shadow over his happy trees.

We all know of the beloved and kind 30 minute segments of Bob Ross gently stroking us through his wonderful painting lessons. If you haven’t completely looked at one, you know his face anywhere, but is the marketing of his face really that of Bob Ross, or a company?

This documentary highlights both sides of Bob Ross; the artist and the company, and how that company affected not only him but his posterity and how we see the man behind the painting. I enjoyed the times when we got to learn more about Bob Ross as well as his son and where their relationship ended. The allegations and the work that went into uncovering them seem very superficial, and with the other party even refusing to be filmed for an interview, it’s hard to know the whole truth.

Overall, this is a fairly entertaining documentary, but also incomplete and not deep enough.

Rated: R for bloody horror violence, and language including some sexual references

Synopsis: A “spiritual sequel” to the horror film Candyman (1992) which returns to the now gentrified Chicago neighborhood where the legend began.

‘Candyman’ has been in the works and delayed due to COVID-19 since last year. The film centers on an artist who discovers the dark history of Cabrini-Green housing, the origins of the “Candyman” and its embodiment of black grief.

Having only recently watched both this new installment and the original this week, it’s very hard to say I have a full idea of â€‹â€‹what this character means not just to pop culture but to the black community. What I can say as a horror movie is that I was terrified and refused to look at a reflective surface all night after watching it.

The acting is excellent and the story, while not 100% cohesive, is still entertaining. Think ‘A Nightmare on Elm Street’ meets ‘The Fly’ when it comes to horror and fear. But director Nia DiCosta is still able to inject real-world issues plagued by the original film as well as gentrification and how the world treats black communities.

The third act was pretty rushed, and many of the scares, while frightening, don’t measure up to the true horror of the iconic bee sequence from the original film. I would always recommend watching this movie, but most importantly, please check out the reviews from black critics such as Brandon avery, Carolyn Mauricette, and Angelique Jade Bastien.

Ranked: TV-MA Ranked for Strong Sexual Content and Language and Drug Use

Synopsis: A teenage girl sets out to give a nebulous classmate the ultimate high school makeover. An updated remake of the 1999 film, ‘She’s All That’.

Review: One pandemic at a time, please

To conclude our time together today we have ‘He’s All That’, a spiritual sequel / reboot of the already problematic and dated ‘She’s All That’. Now featuring Tik Tok legend Addison Rae and the gender of the characters, this may have seemed like a slam dunk for Netflix, but could ultimately be my least favorite movie of 2021.

The movie is a mess from start to finish. Already dated ideas from the original film are not properly addressed and, in fact, this film refuses to learn from the original. I can list where they went wrong and how to improve, but it would literally take too long, suffice to say, one disaster at a time for 2021 please.

Film synopsis: A couple meet another couple while on vacation in Mexico, but their friendship takes an awkward turn when they return home.

Synopsis: A husband and wife are forced to reassess themselves and their relationship through the reality of the COVID-19 lockdown.

To find more Beatty reviews, find it in line, to Patreon, Twitter, IG, FB, and follow his Podcast.