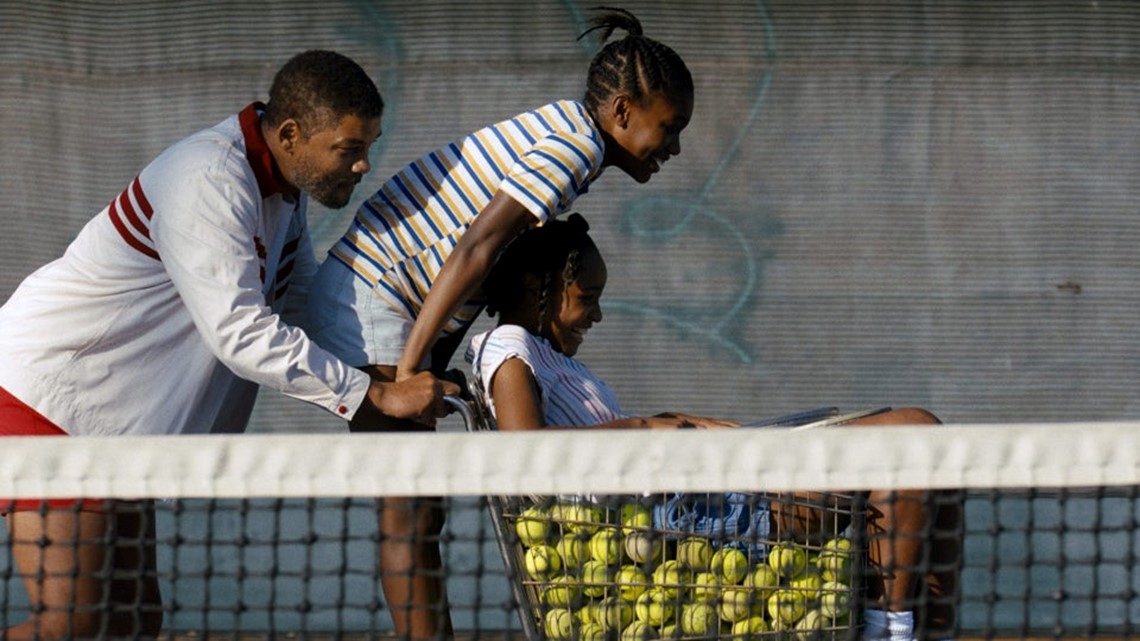 How long have we been waiting for a really good, even decent, Will Smith movie? Well, we finally have it.

How long have we been waiting for a really good, even decent, Will Smith movie? Well, we finally have it, and it might just be the best thing he’s ever done. He plays the title role in “King Richard”, so named because he raised and coached tennis royalty under the name Richard Williams, father of Venus and Serena Williams. The Williams family was straight out of Compton, not exactly the breeding ground for tennis stars, but Richard was convinced he could guide his daughters to greatness. He was a man with a plan. He takes them to the local courts and puts there in no uncertain terms the riches that hard work can bring. The sisters did not hesitate to praise their own talents. We all know they manifested them.

Richard is an outspoken man, and Smith shamelessly tackles the dialect. Richard is as stubborn as the day is long, but he carries himself with pride. He takes Venus, the eldest, to the best camps and coaches, telling Serena all the time that her time draws near. And let’s give props to young women playing these future champions: Saniya Sidney and Demi Singleton. You can tell they trained hard to be convincing. Back home, Richard can take the lead, but Aunjanue Ellis is a revelation as a woman. She lets him know that he’s not the only one raising the best. Reinaldo Marcus Green is only directing his third feature film with “King Richard”. (His second was Mark Wahlberg’s star earlier this year, â€œJoe Bell.â€) He’s smart enough to know that the strength of this story is not in â€œgame, set, match,â€ but in the family ties that unite. And he serves a winner!

Some sequels leave us wondering, do we really need it? With “Ghostbusters: Afterlife” you are happy to take the tour. Lucky for us, Jason Reitman is behind the wheel. The writer / director is the son of Ivan Reitman, who directed the original 1984 film with parapsychologists Bill Murray, Dan Aykroyd, Ernie Hudson, and Harold Ramis battling the supernatural in New York City. In the new, the action takes place in a small town in Oklahoma. The late Ramis’ daughter moves into her dilapidated house with her two children. There, they discover tons of ghost material and for good reason. Something really strange and really huge is going on, something that Ramis’ character tried to stop and couldn’t. So his grandchildren dive into all this ectoplasm to find out. McKenna Grace of Grapevine is the young team leader. Finn Wolfhard, from “Stranger Things”, plays his unfortunate brother. A couple of friends join them for a breathtaking adventure.

Brand new “World’s Sexiest Man,” Paul Rudd plays a teacher who knows a bit about ghosts and meets the Baby Pufts Marshmallow Men at the supermarket. But come on, who are you going to call when you’re really in trouble? The OG, of course! They are made to wait almost too long, but the way they treat the character of Ramis, their absent pal, I challenge anyone not to leave the theater with their throats in their throats. There are a handful of cameos, but wait for the credits one. Very clever. â€œAfterlifeâ€ isn’t an afterthought, but it leaves you craving the first one. These guys were golden.

Wow! Who knew Andrew Garfield could sing! He takes the lead in ‘Tick, Tick … Boom!’ with all the enthusiasm that a performance of Jonathan Larson demands. The film is based on Larson’s play expressing the frustrations of having a Broadway play. Larson, of course, died of a heart aneurysm. aorta the morning his flagship work, â€œRent,â€ was set to have its first Off-Broadway premiere, this film is about approaching his 30th birthday and his feelings that he hasn’t accomplished enough. It was as if he knew his life would be cut short.

Garfield used the pandemic to train for theatrical performance. Yeah, it was brand new to him. Who better to lead it than Lin-Manuel Miranda in his early days, and, of course, he has a cameo. No one better than the creator of “Hamilton” to tell the story of a workshop musical! A fantastic scene featuring some of Broadway’s great icons is inspiring. Besides Garfield, two women shine: Alexandra Shipp as a long-suffering girlfriend and Vanessa Hudgens as a workshop singer. Bradley Whitford is close to doing a parody of Stephen Sondheim rather than just playing the part. (at least it’s small) I liked this movie a lot, but now I love Broadway.

Just choose Julia Child as the subject of a documentary, and you should have the recipe for success. In “Julia”, you absolutely do it! If you saw the feature film “Julie & Julia” a few years ago, you know a little bit about her life story. But you can’t beat the real deal. It is directed by Julie Cohen and Betsy West, also responsible for the Oscar-nominated documentary “RBG” for Ruth Bader Ginsburg.

Here we learn how Child came to love French cuisine and his pragmatic approach to cooking. Especially valuable are those early days of television that didn’t exactly offer the bells and whistles of â€œThe Rachael Ray Show!â€). of love notes. Their story was a love story for the ages. Family, friends and top chefs offer insightful commentary on its impact. Before it became a household word, American housewives were relishing frozen TV dinners. Thank you, Julia, for making us aware of the importance of preparing fresh food. Now if only we could smell what she’s cooking! (Apologies to The Rock.)