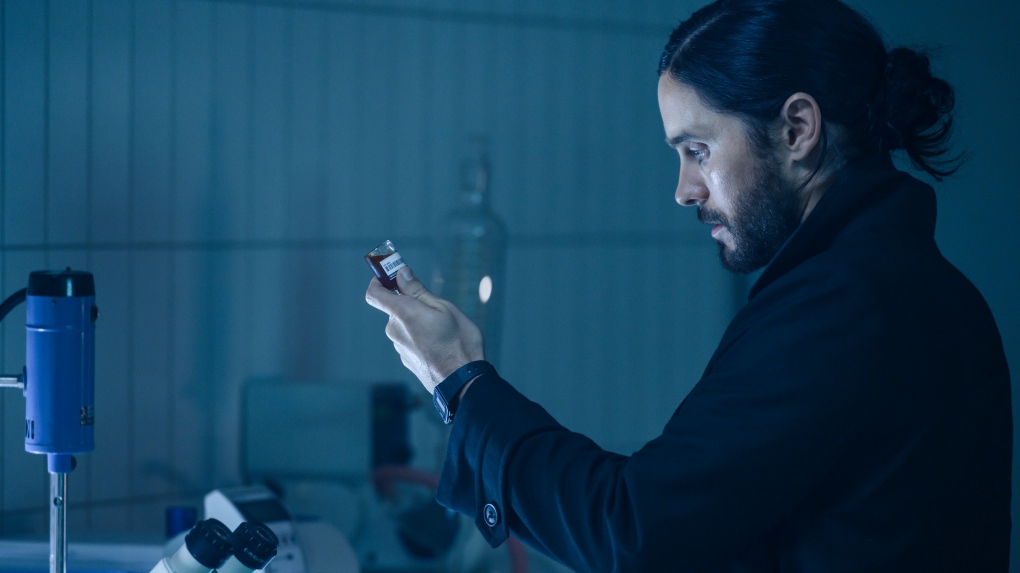 This image released by Sony Pictures shows Jared Leto in a scene from “Morbius.” (Jay Maidment/Sony Pictures via AP)

Sometimes the cure is worse than the disease.

In “Morbius,” a new shared universe of films inspired by Spider-Man characters now playing in theaters, Jared Leto plays a doctor who pushes the old phrase “Doctor, heal yourself,” a bit too far.

Jared Leto is Dr. Michael Morbius, a Nobel Prize-winning biologist with a medical degree in hematology. His field of work is personal to him. Since childhood, he and his best friend Milo (a preening Matt Smith) have battled a rare blood disease that drains him of his energy. As an adult, Michael searches for a cure.

He imagines a cure, but is it a cure or a curse? He will live, and maybe even prosper, but his life will be changed forever.

“I went from dead to being more alive than ever,” he says after becoming “batty”.

The priest transforms him into a transgenic vampire; a being with superhuman strength and speed, heightened senses, accelerated healing “and some form of bat radar”, but none of the usual weaknesses associated with vampires. Bring the garlic and the crosses. But like traditional vampires, he must now drink blood to survive.

“I have powers that can only be described as superhuman,” he says. “But there is a cost. Now I am faced with a choice, hunt and consume blood or die.

He chooses life, but his tolerance for artificial blood is decreasing, and soon he will have to smash everything he believes in and drink real human blood – a choice he hates.

Milo, meanwhile, chooses a darker path, pitting friend against friend. “All our lives we have lived with death hanging over us,” says Milo. “Why shouldn’t we take advantage of life to change?”

It can only be said in one way. “Morbius” sucks…more than blood. Probably negated by a PG-13 rating which must have eliminated some effective horror elements, what could have been, this is a vampire movie without teeth.

A generic story and dated special effects – the bullet time gag was fresh when we first saw it in “The Matrix,” but that was then and this is now – and the whole turgid affair comes to a head in a murky, CGI climax that’s visually hard to follow. You know where this story is going, you can’t tell exactly what’s happening on screen.

Leto is the star above the title, but his bland work is overshadowed by Smith, who at least seems to be having fun as the bloodthirsty Milo.

There are two after-credit scenes in “Moribus” that promise more Doctor Batty stories, but the franchise needs a serious transfusion before continuing the story. 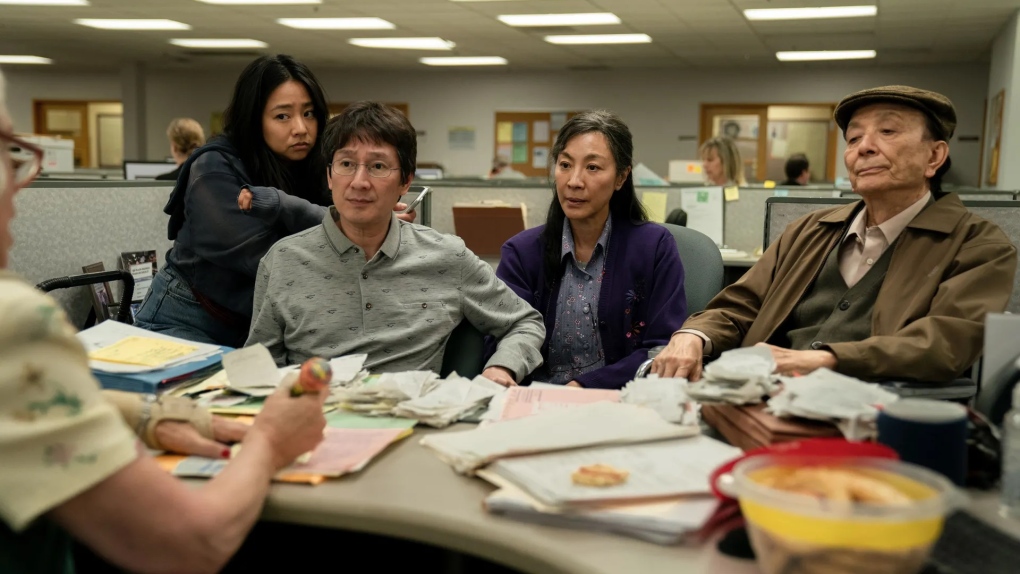 Stephanie Hsu, Michelle Yeoh and Ke Huy Quan in “Everything, Everywhere, All At Once”. (Photo courtesy A24/SXSW)

Marvel has introduced fans to the concept of the Multiverse, a metaphysical theory that sees a collection of parallel universes and alternate realities collide with our own. Marvel superhero superstars Doctor Strange and Spider-Man have both sparked the fantasy light in recent films. Joining them for a cinematic, boogie trip to other worlds, Michelle Yeoh, star of sci-fi spirit “Everything Everywhere All At Once,” is now playing in theaters.

The action begins at a laundromat in suburban Southern California run by Evelyn Wang (Yeoh) and her husband Waymond (Ke Huy Quan). The couple have a meeting with the IRS and the situation is dire. “You might just see a stack of receipts,” says bureaucrat Dierdre Beaubeirdra (Jamie Lee Curtis). “But I see a story. I can see where this story is going, and it doesn’t look good.

The reunion takes a strange turn when Waymond pushes Evelyn into a broom closet, sending her to another dimension to battle an evil spirit called Jobu Tupaki, armed only with a Bluetooth headset.

“I am not your husband,” he explains. “I’m another version from another universe. I’m here because I need your help. Across the multiverse, I’ve seen thousands of Evelyns. You can access all of their memories, their emotions , even their skills. There is a great evil spreading throughout the many verses, and you may be our only chance to stop it.

And off she goes, on an adventure involving multiple Evelyns as a chef, martial arts expert, and movie star. As she jumps into verse, she must absorb the powers of all of her alternate personalities and bring them back to the IRS offices.

“Everything Everywhere All At Once” is the most aptly titled movie of the year. A frenzied assault on the senses, it’s a wild, woolly adventure where the weird factor is up to 11 and literally anything can happen. A universe where everyone has hot dogs for their fingers? To verify. A sincere conversation between two sensitive stones? To verify. A bagel that contains the secrets of the universe? To verify.

You can say a lot about “Everything, Everywhere, All At Once”, but you can’t say you’ve seen anything like it before. A breathtaking reflection on the power of kindness and love to heal the world’s problems, it’s both exhilarating and exhausting. Directors, Daniel Kwan and Daniel Scheinert, known collectively as The Daniels, mix and match everything from family drama and tax issues to martial arts and metaphysics in a whimsical story that moves at speed light. The result is a singular film that takes the intentionality out of its madness. 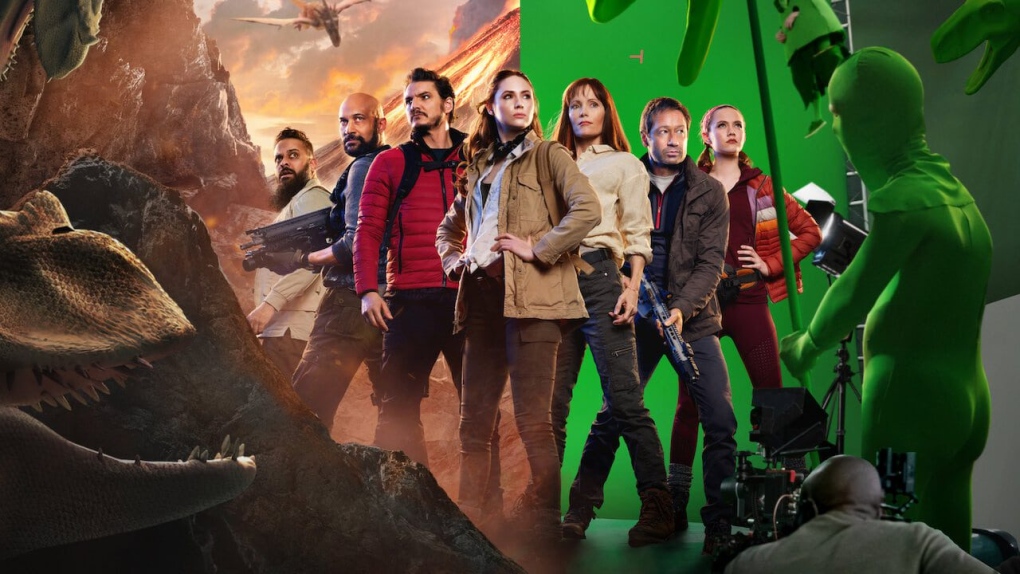 A scene from the movie “The Bubble”. (Photo courtesy of Laura Radford/Netflix)

Many movies have been made during the pandemic lockdown, but few have touched on what life was like on a quarantined movie set. “The Bubble,” a new Judd Apatow comedy now streaming on Netflix, is a Hollywood satire that mixes and matches spoiled stars on a film set with COVID-19 protocols, such as physical distancing, daily antigen testing and a “no connection with your co-stars rule”.

For most of them, returning to the franchise is just a matter of paycheck. For first-time director Darren Eigan (Fred Armisen), however, it’s a career job, if only he can convince stubborn actors to see his vision.

As filming drags on, the actors break the rules, clash and mutiny, all the while complaining of being mistreated. “You’re an ill-treated ‘actor’,” says an exasperated manager. “I am an abused ‘human being’.”

Basing a comedy on the pandemic is a nervous decision. Most of us have been through it, locked up and playing by the rules, but part of the fun of “The Bubble” is watching these pampered and privileged people put in a situation where their money and fame don’t matter. ‘importance. Very early on, Carol, isolated in a posh hotel room, falls into a state of fugue despite the splendor that surrounds her. This is a first indication that the pandemic is the great leveler and is the source of several very funny scenes.

The hijacking of Hollywood by Apatow is also singled out. Egos run wild as the insecure actors jump from bed to bed, complain about the script – “It’s against dinosaur logic,” says an oh-so-serious Mulray – and try to escape the ever-vigilant security. delivering wicked, dead zingers – “I think all the critics around the world were wrong,” Lauren tells Carol in reference to Rotten Tomatoes’ appalling score on her “Jerusalem Rising” flop. Cumberbatch and James McAvoy and on set hi jinx, Apatow hits the nail on the head. Sometimes a little too outright, but it’s an entertaining ride.

The pandemic backdrop of “The Bubble” is a grave and all too recent memory, but thankfully the film doesn’t take itself too seriously. Apatow, whose streak of sticking with a story a little too long is unbroken here, finds the right tone, and as the story and characters spiral out of control, he finds it funny and doesn’t let go. 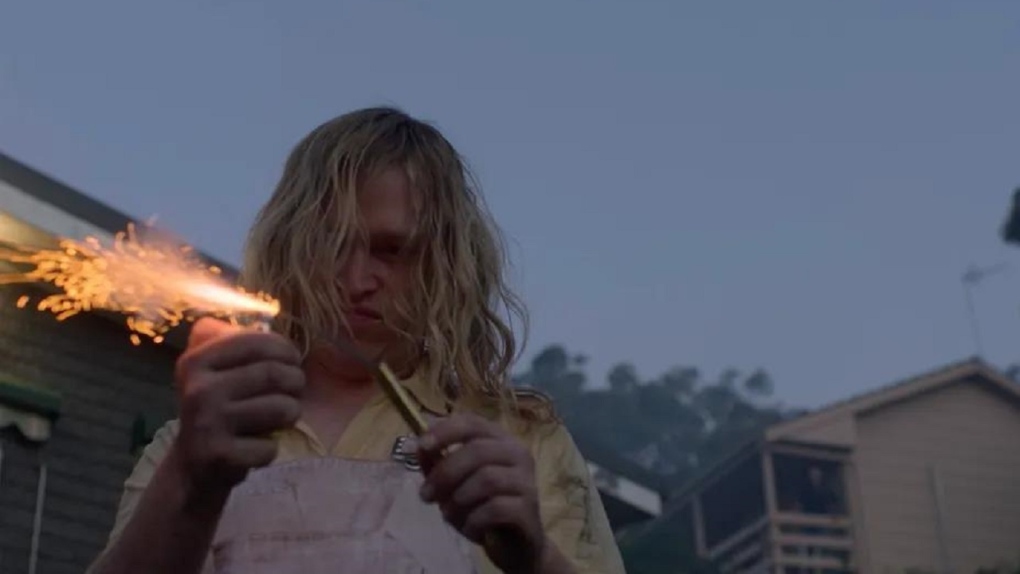 ‘Nitam’, a dramatization of the events leading up to the 1996 massacre in Port Arthur, Tasmania, which killed 35 people and injured 23 others, exploits the nihilism of its main character in an attempt to shed light on an act foolish.

In his retelling of the story, Australian director Justin Kurzel made a deeply disturbing, but not violent, film. It replaces the violence of the tragic real-life event with the difficult trajectory of a killer in the making.

Known as Nitram – the film never uses his real name – Caleb Landry Jones plays the titular character as an impulsive, detached twenty-something loner who lashes out at the slightest provocation. Her mother (Judy Davis) is exhausted after years of dealing with her antisocial and unpredictable behavior, but her father (Anthony LaPaglia) tries to find a compassionate coping mechanism.

They get a bit of a reprieve when wealthy recluse Helen (Essie Davis) hires him to mow her lawn and invites him to move in. She treats him with kindness and becomes a stabilizing force in his life. When she dies suddenly, followed by the death of her father weeks later, Nitam is freed with a large inheritance thanks to Helen’s largesse.

Nitram’s childhood fascination with fireworks translates to a love of firearms as an adult. In the film’s scariest scene, he buys powerful automatic weapons from an armory owner who’s only too happy to make a sale.

This is the first tangible step towards infamy.

The events of April 1996 are not depicted in the film. In fact, there is very little violence on display. Instead, Kurzel crafted a dark but effective portrayal of mundane evil. Jones embodies the character, playing him like a cipher with a deep well of rage. It’s not a flashy performance. It’s dark, hard to read and even harder to understand. Alienated, he lacks empathy or compassion; a ticking time bomb ready to explode. It’s disturbing character work, so carefully rendered that knowing how the story ends will make your skin crawl.

There’s little sensationalism or exploitation in “Nitram” storytelling, but I wondered why a movie, even one that doesn’t name the killer by name, exists.

It’s one thing not to say his name, it’s another to make a movie about an actual man who became a monster, breaking up dozens of families in the process. “Nitram” doesn’t glorify him in any way, but it also doesn’t shed as much light on the how and why of his unspeakable deeds. It’s a well-made film that prefers to hammer home its indelible gun control message, but in its very existence it delivers uncomfortable notoriety to someone best forgotten.