At the start of “Spider-Man: No Way Home,” the new two-and-a-half-hour superhero movie currently playing, Peter Parker (Tom Holland) learns that it’s hard to be a crime fighter mask. when everyone knows who you are under your red and black costume.

Exposed by the supervillain Mysterio at the end of “Spider-Man: Far from Home”, Parker’s life has been turned upside down. And not in a fun way, like in 2002’s “Spider-Man,” when Tobey Maguire and Kirsten Dunst shared a backside kiss in the rain.

It was good harmless fun.

These days, the friendly neighborhood web-slinger’s newfound notoriety makes it difficult for him to balance his personal life and relationships with girlfriend MJ (Zendaya), best friend Ned (Jacob Batalon), and aunt May (Marisa Tomei), in addition to his role as a crime fighter who saves the world.

“People looked up to this boy and called him a hero,” says J. Jonah Jameson (JK Simmons), the conspiratorial host of TheDailyBugle.net. “Well, I’ll tell you what I call him, Public Enemy #1!”

Some think he’s a hero, others see him as a vigilante. As his identities become blurred, Parker turns to caped neurosurgeon and master of the mystical arts, Dr. Stephen Strange (Benedict Cumberbatch), for help.

“When Mysterio revealed my identity, my whole life was ruined,” Parker tells Strange. “I was wondering if you could make sure that never happened.”

Parker wants Dr. Strange to cast a spell to brainwash the world into forgetting he’s Spider-Man.

That’s a big ask. “Be careful what you wish for,” Strange said, warning Parker that casting such a spell will alter the stability of space and time.

Sure enough, the spell blasts a hole in the Multiverse – the collection of parallel universes with alternate realities – and unleashes “Universal Intruders,” the most terrifying foes Spider-Man has ever faced in this or any other realm. .

The story’s trippin’ interdimensional leaps, while entertaining, are secondary to the film’s strongest feature: Spider-Man’s empathy. “Spider-Man: No Way Home” is a movie about second chances. Peter Parker doesn’t just want to defeat his enemies, he wants to understand them, to know why they behave the way they do. By the time the end credits come, the bad guys might not be able to wreak havoc anymore, but not for the reasons you might imagine.

In real life, the world is divided by ideology and opinion. “Spider-Man: No Way Home” asks us to look at these differences, find their roots, and try to heal them. It does so with plenty of Marvel-brand action and stuffed bombshell, but the core message of empathy and understanding for others is what drives the film forward.

“Spider-Man: No Way Home” is a mix of euphoria and exhaustion. It’s inconsistent in its storytelling, overdone at times, and the finale is an extended CGI fest, but when it focuses on the characters; the empathy and chemistry between the cast, it soars like Spider-Man slinging webs and zooms effortlessly between skyscrapers. 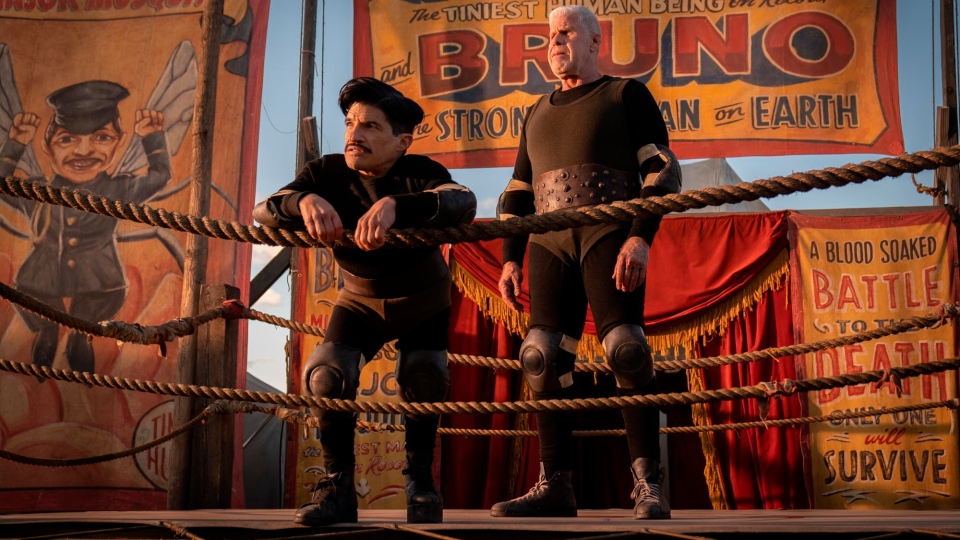 Don’t go to “Nightmare Alley,” a remake of the 1947 film noir Tyrone Power, now playing in theaters, for the heartier. Guillermo Del Toro’s new film is as cold and chilling as the season it was released. Any movie that starts with the burning of a corpse and ends, well, you’ll have to buy a ticket to find out, isn’t exactly designed to make your season shine, but moviegoers should find it a gift. .

Set in the days leading up to World War II, the story begins as Stan Carlisle (Bradley Cooper), a drifter with a dangerous past, takes a job at a traveling carnival. Paid a dollar a day plus a hot meal, he does a lot of work, setting up the marquee tent and doing physical labor.

Her gift for small talk soon earns her a promotion, working as a barker for the theatrical mystic Zeena (Toni Collette) and her magician husband Pete (David Strathairn). Stan is a quick study and becomes an expert on how to scam people out of their hard earned money.

Longing for something bigger, he takes his own mentalism act on the road with the help of his assistant and love interest Molly (Rooney Mara). It’s all fake, the two communicate through a series of veiled verbal cues, but the audience eats it. They make money performing at high-end nightclubs, but the offer to do private readings for VIPs comes with a price Stan can’t resist.

Del Toro is known for creating complex worlds populated by amazing people and creatures, but don’t expect a rerun of “Pan’s Labyrinth” or his Oscar-winning “The Shape of Water.” There are no supernatural elements in “Nightmare Alley”. The monster here is Stan’s cold, hard ambition.

Cooper is in slickster mode here, playing Stan as a soft-spoken manipulator whose bad deeds pile up like some sort of ethics-defying Jenga game. He is an enigma. Willing to do whatever it takes to survive. He is a flawed but coldly ambitious man whose eyes are always on the future. This is its greatest asset and, ultimately, its downfall.

Cooper does a good job of exposing Stan’s layers. He’s a complicated character, an amoral seducer with a seemingly charming disposition, and Cooper allows only brief spikes in his desperation and brutality.

As good as Cooper is, it’s Cate Blanchett as psychiatrist femme fatale Lilith Ritter who steals the show. From her overpainted red lips and seductive nature to her quick wits and vulnerability, she’s the film’s most interesting and dangerous presence. Nice desk too – it’s an Art Deco lover’s paradise.

But “Nightmare Alley” is above all Del Toro’s film. He doesn’t need any of his trademark creatures like the Pale Man or the Asset to shock. Here he takes a methodical and detailed approach to the story, gradually building up shocking violence and psychological horror. His interest here is the sinister, not the supernatural, and as the first hour bogs down with setting up and a major plot point is telegraphed (NO SPOILERS HERE!), his ability to create a atmosphere is unique. Nobody throws a shroud of menace like Del Toro.

“Nightmare Alley” takes its time to set up its dark pleasures, but emerges as a memorable homage to film noir with images that will linger in your mind long after the theater lights are turned on.

Director Sean Baker has made a career out of chronicling life on the fringes. His lo-fi, low-budget, naturalistic movies “Tangerine” and “The Florida Project” are about strangers but never dismiss their subjects. His latest, “Red Rocket,” now playing in theaters, continues his trend of neither celebrating nor condemning the choices made by his pissed off characters.

“She’s smoking hot,” he said. “She took the first step. She doesn’t have a father, and here’s the thing, she lets me sell weed to the helmets of her work. Does it get any better than that?

“Red Rocket” is a story, loosely told, of the upside of the American dream. Saber is a crook, a hustler, all talk, no action (at least outside of the sheets). A narcissistic loser, he has ideas but not the means to realize them and, unfortunately, he drags down those around him in his desperate ascent. Rex makes it compelling, bringing humor and pathos to a complete asshole.

“Red Rocket” doesn’t feel as tightly constructed as Baker’s other films. It shares the same stained Marlboro soul, but this time around its examination of the choices people make simply to survive crumbles almost as much as its characters. 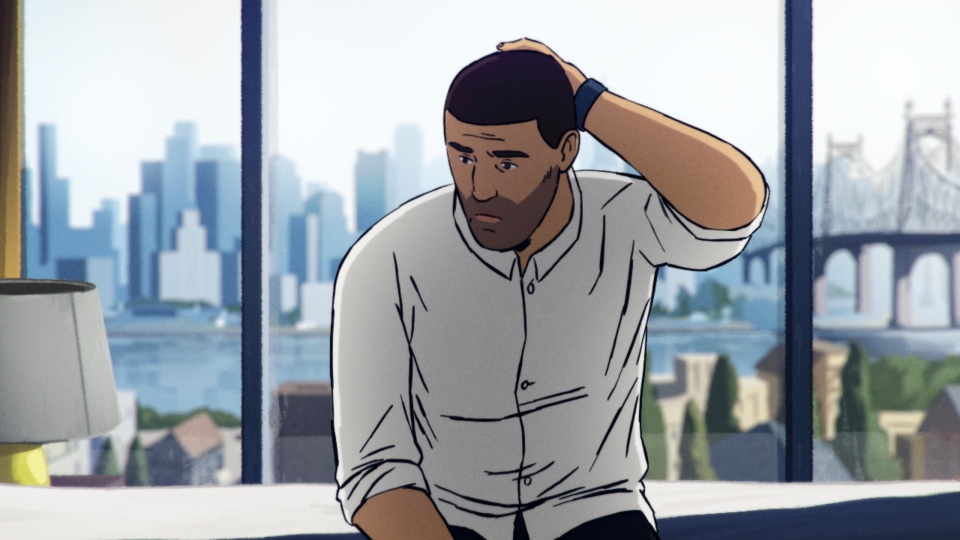 “Flee” is a rarity, an animated documentary. A blend of personal and modern world history, it’s a candid look at the true and hidden story of the harrowing life journey of a gay refugee from Afghanistan.

The foundation of this boundary-pushing documentary is 20 taped conversations Danish filmmaker Jonas Poher Rasmussen had with his childhood friend Amin (a pseudonym). As an adult, Amin is about to marry his partner Kasper when he sits down to talk to Rasmussen about how his life has brought him to this moment.

He recounts how his father disappeared and his brother was drafted to join the army in 1979 after the Soviet Union invaded Afghanistan. As a child, he fled his war-torn country with his mother and siblings to find a safe new life. They landed in Russia on a tourist visa right after the fall of the Soviet Union, leaving the country corrupt and dangerous.

Time passes. As Russian police hunt him down as an undocumented resident, he embarks on the most dangerous journey yet. With the help of an older brother in Sweden, Amin puts himself in the hands of human traffickers for a traumatic and uncertain trip to Copenhagen.

Except for a few minutes here and there of archival news footage, “Flee” uses animation to tell the story, but it’s not “Looney Tunes.” Rasmussen used animation to protect Amin’s identity, but like other serious animated films like “Persepolis” and “Waltz with Bashir”, the impressionistic presentation enhances the story telling. Rasmussen’s animation styles change to reflect and bring to life the different stages of Amin’s journey. It’s suspenseful, heartbreaking and often poetic.

But it’s Amin’s urgent, heartfelt storytelling and Rasmussen’s prompting that make the story of resilience and survival so gripping. From the grueling trek to a new country to the no-nonsense search for a cure for his homosexuality in Denmark, “Flee” proves to be a unique work of art based on a true, traumatic and all-too-common refugee experience.