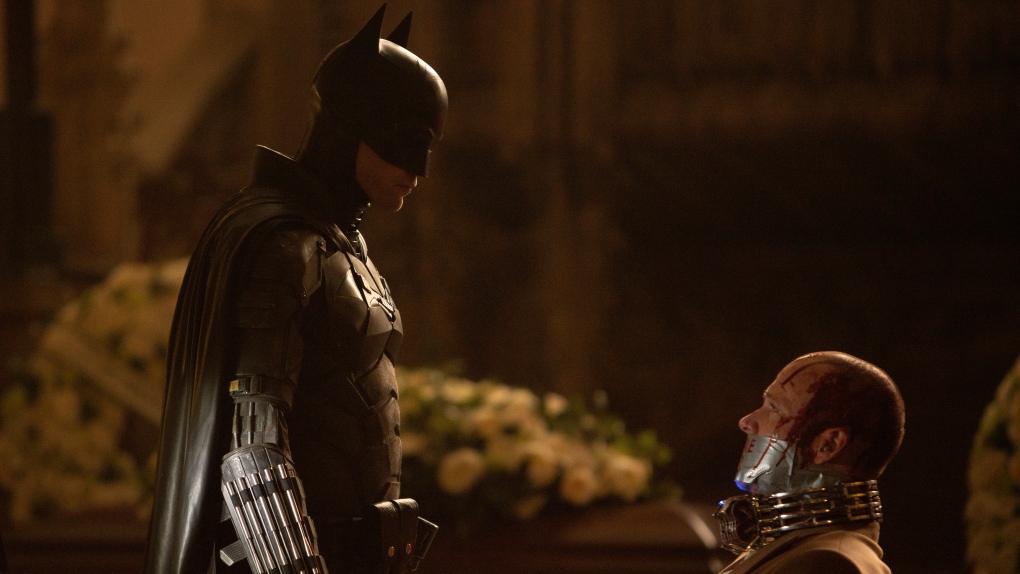 On some level, Batman has always been escapist entertainment. Comics, TV shows, and movies have always tackled big topics like morality, revenge, and the razor’s edge between anarchy and order, but between Adam West’s smile, Michael’s gadgets Keaton and Christian Bale’s colorful enemies, escapism is always part of the mix.

“The Batman,” starring Robert Pattison as the Caped Crusader, and now playing in theaters, is three hours of entertaining Bataction, but the real-world themes of distrust of the chosen ones, our constitutions, and ones towards others, offer anything but escape.

The story begins on Halloween night, as costumed criminals invade Gotham City. As chaos reigns in the streets, the Bat-Signal lights up the sky. “When the light reaches the sky, it’s not just a beacon,” Batman (Pattison) says, “it’s a warning…to them.” Fear is a tool.

It’s a tool that Batman uses effectively. His masked presence, fists of fury, and habit of growling, “I am revenge,” made him a fearsome presence in Gotham City. The rank and file police aren’t sure what to make of the Caped Crusader, but Detective James Gordon (Jeffrey Wright) sees him as an asset, especially when the city’s top officials begin dying at the hands of the Riddler (Paul Dano), a psychopath whose costume suggests he is a fan of the Gimp from “Pulp Fiction”.

With each gruesome murder, the Riddler leaves behind a cute card for Batman, inscribed with a riddle, like “What does a liar do when he dies?” this could serve as a clue to solving the crime.

The nearly three-hour runtime of “The Batman” might seem daunting, especially in the wake of several overlong superhero movies that haven’t delivered the goods. I’m happy to report that director Matt Reeves has made a movie that goes by in the blink of an eye.

This is not an origin story, this story has been told many times. It’s more of a coming-of-age tale. Portrayed by Pattison, Bruce Wayne is a stark, sour hero who, when asked, “Are you horribly scarred?” responds “Yes”. Her scars, however, are all on the inside.

He is driven by a sense of revenge to clear the streets of the kind of people who killed his parents. It is, he says, his legacy, not the fabulous wealth of Wayne Enterprises. As the story progresses, his mood doesn’t change – it’s as if Pattison’s perfect cheekbones would shatter if he cracked a smile – but his gaze does. Batman may be the face of revenge, but as the end credits roll, he realizes that hope outweighs revenge. “People need hope,” he says. “Knowing that someone is there for them. The city is angry. The city won’t change, but I have to try.

After five “Twilight” films, Pattison understands how to ruminate on screen. He’s comfortable with the stillness required by the character, which works well to emphasize Batman’s loner status. The stillness of the character, when not running, jumping, or pounding a bad guy, suggests a calm but that feeling is betrayed by the simmering rage behind Pattison’s eyes. It is this anger that gives him an unspoken reason to exist.

He’s a Batman who’s still figuring it out, who’s fueled by his need for revenge, but working to channel his energies in ways that will benefit him, the people he loves, and Gotham City. He has no superpowers, just a powerful engine and a handful of gadgets. It’s a one-man army, and Pattison does a good job of showing us, without telling us, the complexity of the character.

Director Reeves stripped away much of the finesse of Christopher Nolan and Zack Snyder’s films in favor of a grittier vision. Think of 1970s films like “Chinatown”, “The French Connection” or “Taxi Driver”. Reeves has created a summed up detective noir that cuts back on the theatrics of previous versions to focus on the personal stuff.

But that doesn’t mean there’s no action to spare. The new Batmobile, now a muscle car, debuts in a wild car chase and Pattison’s Batman doesn’t kill people, contrary to Affleck’s take on the character, but that doesn’t mean he doesn’t. is not ready to strike hard. his opponents.

“The Batman” is an interesting new direction for the Caped Crusader movies. There have been better villains in other movies and the sins of the father angle has been explored before, but this movie captures the zeitgeist in a very interesting way. It confronts hot topics like the alt-right, agents of chaos and lying politicians, issues pulled from the headlines but tempered with a message of hope, of rebuilding belief in the world around us.

I guess every generation has the Batman they deserve. Our world of hard knocks has delivered us a Batman with an edge; a troubled hero who almost succumbs to his worst tendencies, but, in the end, looks towards a horizon of hope. It’s a powerful message for our world gone mad, especially when it comes from a guy in a mask. 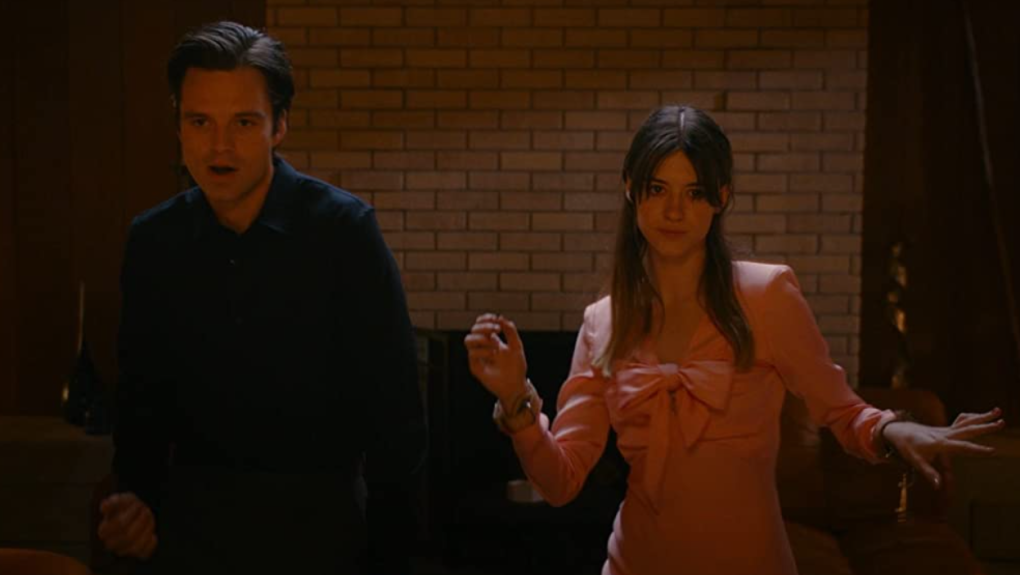 Even after a particularly bad Tinder date, single 20-something Noa (Edgar-Jones) isn’t willing to listen to her best friend Mollie (Jojo T. Jones) when she says, “You don’t you don’t need a man. She is looking for love and seems to have found it, of all places, in the produce section of the local supermarket.

She meets cute with Steve (Stan), a handsome and funny cosmetic surgeon, who charms her into giving her his phone number, then says, “I’m not going to text you…but I really want to.”

Nonetheless, they set up a date, and things get hot and heavy “somewhere between the second and third drink.” They sparkle and end up at her house. The next day, after a meal and a dance, he said, “We should go somewhere. A pleasant place. It might be a surprise. »

Noa, hungry for love, agrees to the weekend getaway, only to learn her new boyfriend’s deadly and sick secret.

“Fresh” is darkly comedic and terribly dark stomach. It’s a midnight movie that’s not afraid to take its metaphor of deadly encounters to gory extremes. The first thirty minutes unfold like a romance, but when the title credits appear on screen, it brings with it a dark tone – and an unpleasant interpretation of what the name actually means – that lingers until the final scene. intense. It exudes the same air as “Promising Young Woman” in its blend of modern allegory and horror, but when things get awful, it stands on its own.

Director Mimi Cave, working from a screenplay by Lauryn Kahn, weaves social commentary on the commodification of women and modern dating into history. It’s bold storytelling bolstered by a relatable performance from Edgar-Jones that fits like a jigsaw piece with Stan’s oddly heartbreaking character. As Steve, he’s suave and sadistic, in what is perhaps his meatiest role yet. In a weird way, given the machinations of the story, they have great chemistry.

“Fresh” is stylishly done, with good performances, but feels too quiet in its approach. Cave spends time setting up the romance (and what comes after BUT NO SPOILERS HERE) but doesn’t provide the same luxury for the characters. If we knew more about Noa, Steve and Mollie, the already high stakes would be much higher. Still, even if “Fresh” goes on too long, it manages to find a satisfying and memorable way to put a period on the story for patient viewers. 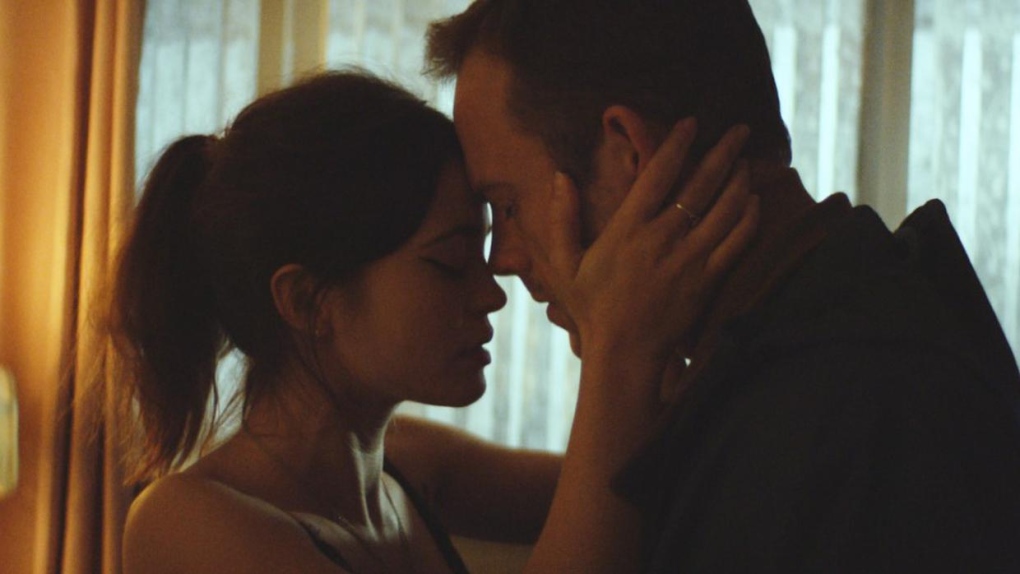 Director Stephen Fingleton was so determined to shoot “Nightride,” a new crime thriller now on VOD, in one long, uninterrupted take that when real cops stopped the lead actor’s car in the middle of the film, he kept the camera running, improvised, and kept the scene in the film.

Set in the wicked streets of Belfast, the film centers on petty drug dealer Budge (Moe Dunford). He wants to buy a body shop and go straight. “You always knew what I’m doing,” Budge told his co-investor Graham, “and I was done doing it after tonight.”

The problem is that he has no money. He decides on the former “one last job” to raise the money. With “a bridge loan” from a notorious loan shark – “it’s the money I need to have the money for tomorrow”, he says – Budge manages to buy and then resell 50 kilos of drugs . After the sale, he will double the money, repay the loan shark, who wants his money before midnight the same evening, and have enough money to start his new life.

When the plan goes wrong. the buyer steps back and Budge holds the bag. As the clock ticks towards midnight, he desperately tries to remedy his situation before the loan shark “puts him under a slab” and his dreams of owning the body shop vanish.

The main plot of “Nightride” is something we’ve seen before. The “last job” story may be familiar, but the execution of the film is not. The one-shot technique, which is often tricked out with tricky editing but seems to be legit here, is effectively used to convey the sense of drama Budge feels as his shot swirls through the sewers. It effectively creates a you-are-there vibe that adds to the tense atmosphere that surrounds Budge.

Dunford is onscreen for 95% of the film, often driving his car as the action revolves around him. His charisma and inner performance – his calm exterior hides what must be an internal ocean of emotions – keeps the story on track. Almost all of the real action takes place off-screen and yet, thanks to Dunford’s facial expressions and body language, we always know what’s going on.

As for the plot, there’s nothing we haven’t seen before in “Nightride.” From evil loan shark and last-score angle to failed plan and high personal stakes, it might sound like deja vu, but Fingleton’s fast pace, atmospheric soundtrack and strong performances elevate the material. .