The list of films that Hollywood considers sacred and untouchable is short. Only a punishment bugger would attempt to remake “The Godfather.” And imagine the mockery that would accompany the announcement of a “Casablanca” or “Do what it takes”.

Until recently, I would have put “West Side Story,” the classic 1961 musical that won 10 Oscars, in the top five movies on the “no go” list. But much like that show riffing on “Romeo and Juliet,” a classic if there ever was one, Steven Spielberg takes another look at a memorable film that the TCM crowd considers untouchable.

Set in New York in the 1950s, the story of love at first sight is played out against the backdrop of the gentrification of the Upper West Side, then a working-class district. Two gangs, the Puerto Rican Sharks and the Jets, the “last of the Caucasians who can’t make it,” run the streets as New York’s slum clearance department carves up their territory. The only thing they have in common is a “womb-to-tomb” membership motto.

Tony is out on parole for nearly beating a boy to death in a rumble, but has turned over a new leaf. “I want to differentiate myself,” he says, “because I was headed for the sewers.” It also ends the notion that “once you’re a Jet, you’re a Jet all the way”. He wants to leave this life, but above all, he wants Maria.

As Riff and Bernardo plan a rumble to viciously resolve their differences, Maria begs Tony to end the violence. “We can’t pretend that what we’re doing hasn’t caused these problems,” she says. Tony intervenes, but the situation quickly spirals out of control.

Steven Spielberg’s take on “West Side Story” feels rooted in the tradition of movie musicals, but vibrates with current themes. The mindfulness that was revolutionary for musical theater in the 1950s on Broadway is present and developed. Tony Kushner’s screenplay provides context and stories for the underdeveloped characters and plays on burning themes of racial animosity, poverty and violence.

However, it is mostly about love.

It’s love that causes all the trouble but also gives the film its beating heart. Like the couple in question, Elgort and Zegler are attractive, wide-eyed romantic characters. Zegler is a compelling whirlwind of determination and innocence, with a beautiful voice. Elgort can wrap his mouth around Stephen Sondheim’s beautiful lyrics – “Maria, say it loud and there’s music. Say it soft and it’s almost like praying” – but doesn’t shine as loudly as some of his co-stars.

But it’s a returning actor from the 1961 film who gives the film its soul.

Rita Moreno won an Oscar for playing Anita in the original. Here, she plays the role of drugstore operator Valentina. Kushner expands the role, making the character the conscience of the neighborhood. She is luminous in the role and, in a major change from the 1961 film, does a solo rendition of “Somewhere”, a song of hope usually sung by romantic leads. Here it is devastating, played as a song of longing and loss. If my goosebumps voted for the Oscars, Moreno would have another statue to put on his shelf.

“West Side Story” is Spielberg’s most gripping film in years. It reinvents, reimagines, and recontextualizes a classic story with energy, reverence, and lots of finger snapping. 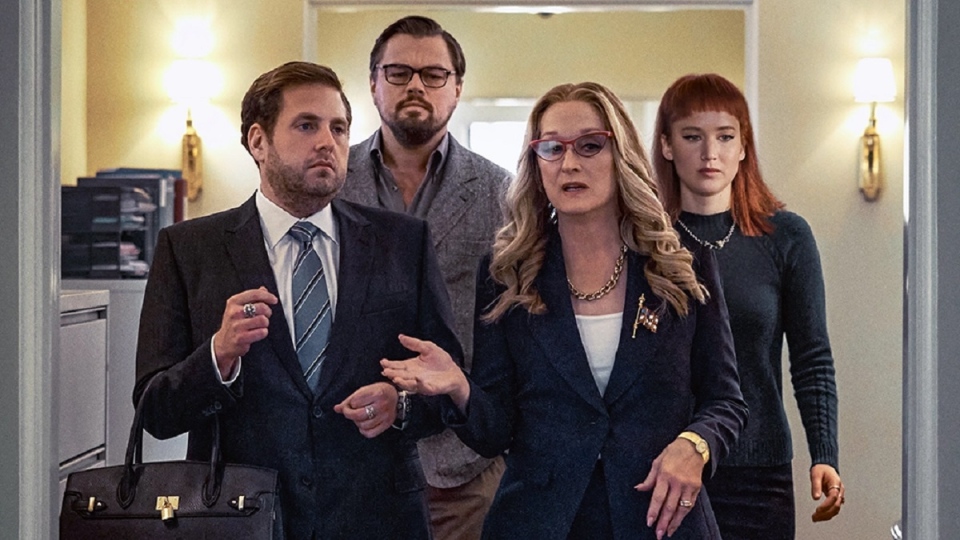 Movies about giant objects traversing space to Earth are almost as plentiful as the stars in the sky. “Armageddon,” “Deep Impact,” and “Judgment Day” all feature doomsday scenarios, but none have the satirical side of “Don’t Look Up.” The darkly comedic film, now in theaters but coming soon to Netflix, paints a grim and on-the-nose picture of how the world responds to a crisis.

Jennifer Lawrence is PhD candidate Kate Dibiasky, an astronomer student who discovers a Mount Everest-sized comet aimed directly at our planet. His teacher, Randall Mindy (Leonardo DiCaprio), comes to the alarming conclusion that the comet will collide with Earth in six months and 14 days in what he calls an “extinction-level event.”

They take their concerns to NASA and the White House, but meet President Janie Orlean’s (Meryl Streep) concerns about optics, costs, and the upcoming midterm elections. “The timing is just dire,” she says. “Let’s sit down and assess.”

As the clock ticks to total destruction, Dibiasky and Mindy go public, but their dire warnings on perky news show “The Rip” – “We keep the bad news light!” – remain a dead letter. Social media focuses on panicking Dibiasky, creating memes of his face, while dubbing Mindy the “Bedroom Eyed Doomsday Prophet”.

As the comet heads towards Earth, the world is divided between those willing to look up and do something about the impending doom, and deniers who think scientists “want you to look up.” because they look down on you”.

Chaos erupts and division widens as the comet nears its target.

It’s not hard to find parallels between the events of “Don’t Look Up” and recent world events. Director and co-writer Adam McKay explores the backlash to global affairs through the lens of fake news, clickbait journalism, science skepticism, political spin, and social media gone mad. In fact, the topics covered by McKay do not sound like satire at all. The social media outrage, the bizarro-land decisions made by people in high office, and the influence of tech companies all seem very real, as if ripped from today’s newspapers.

It’s timely, but perhaps too timely. Social satire is big and popular – “Saturday Night Live” has done it successfully for decades – but “Don’t Look Up”, while brimming with good ideas, often feels like an excess of familiarity. The comet is fiction, or so I hope, but the reaction to it and the disaster to come looks like something I might see on Twitter just before the lights go out in the theater.

It seems a bit too real to be pure satire. There’s laughter everywhere, but it’s the serious questions that resonate. When Mindy, on TV having her “Network” moment, rages, “What happened to us? What did we do to each other and how do we fix it?” the film becomes a beacon. Satire comes easy – let’s face it, the world is full of soft targets – but it’s asking the hard questions and in the frustration of a world gone mad, when McKay’s point that we’re broken and don’t appreciate the world around us, shining through.

Despite glitzy big Hollywood names above the title and plenty of laugh lines, “Don’t Look Up” is no escapism. It’s a serious film that aims to entertain, but really wants to make you think. 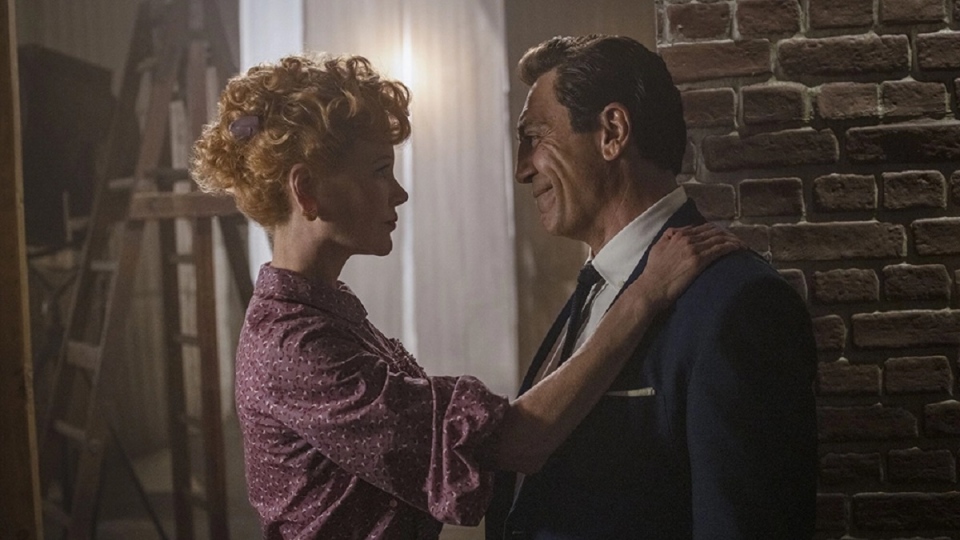 “Being the Ricardos,” Aaron Sorkin’s new look at the most famous television couple of the 1950s, in theaters this weekend and on Prime Video December 21, is a character study that examines a very bad week on the sitcom set of “I J’adore Lucie.

In 1953, “I Love Lucy” was watched by 60 million people a week. The show was so popular that department stores had to change their hours. The big box stores stayed open late on Mondays, but moved to Thursdays because no one was shopping on Monday nights while Lucy, Desi, Fred and Ethel were on.

Real-life couple Lucille Ball and Desi Arnaz, played in Nicole Kidman and Javier Bardem’s film, are TV’s biggest stars as they prepare to film the fourth episode of their second season. Tension hangs over the set following two reports on the couple.

The first is Confidential Magazine, a sordid tabloid specializing in scandal and exposed journalism, which accuses Desi of having an affair in a sinister article titled “Desi’s Wild Night Out”. More damningly, another report suggests that Lucy is a communist, under investigation by the FBI and the House Un-American Activities Committee.

The accusation against Desi causes trouble at home, but even a whiff of communism around Lucy could lead to a stench that would ruin both of their careers. The Hollywood blacklist looms.

“You and I have been through worse than that,” Desi said reassuringly.

Set up as a pseudo-documentary, modern-day talking heads drive the story forward while flashbacks flesh out the action. We learn how the pair met, their rocky relationship – “They would tear each other’s clothes off,” says writer Madelyn Pugh (Linda Lavin), “or tear each other’s heads off.” — and how showmanship and Lucy’s perfectionism are more than just a professional concern, “I Love Lucy” was the glue that held her marriage together, especially during troubled times.

It can be difficult to portray familiar characters on screen. Thanks to endless reruns, Lucille Ball’s face and comedy are iconic, but Kidman and Bardem wisely chose not to do any star impersonations. They have mannerisms and a passing resemblance to Lucy and Desi, but this is in character, not caricature. For the most part, it’s behind-the-scenes drama that wisely avoids reenacting scenes from “I Love Lucy” that are seared into people’s imaginations. What we get instead are renditions of these characters that correlate to their collective charisma, hot temper, and talent.

What emerges is a sparse portrait of the fame, creative control and power of the press. Sorkin juggles a lot of moving parts, but by the time the end credits roll around, it’s hard to know exactly what point he’s trying to make. Ball gets the credit she deserves as a trailblazer and Arnaz’s business acumen is celebrated, but the other colliding plot points feel cobbled together. Any of them – the fear of communism, Desi’s alleged infidelity, Lucy’s pregnancy, or the cast’s fights – could have sufficed as a compelling backdrop for Lucy and Desi’s story. Instead, the movie feels overloaded.

“Being the Ricardos” does justice to its subjects’ legacy and features pages of Sorkin’s trademark crisp dialogue, but splits in too many directions to be truly effective.