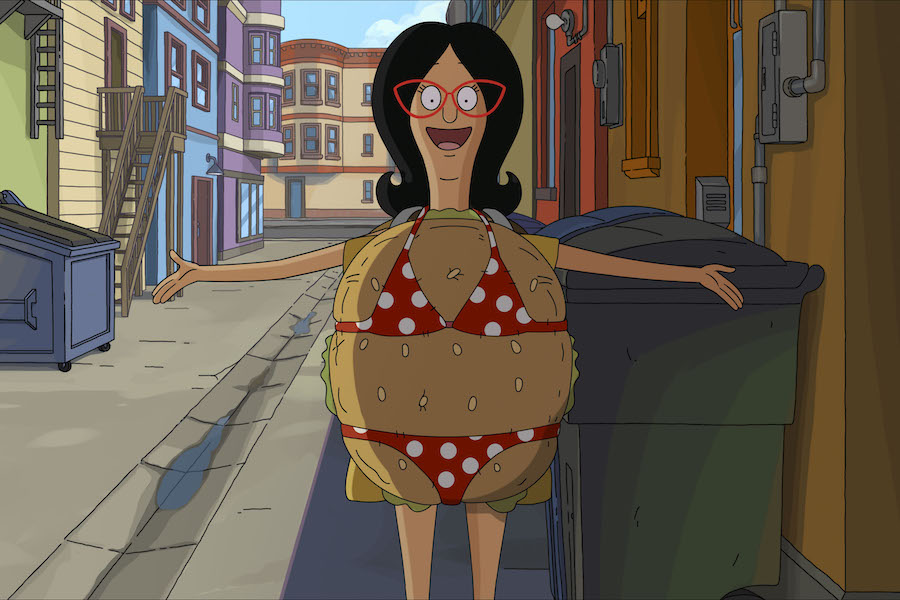 There’s a richness to the cinematic language of Benediction, a biopic about World War I veteran and poet Siegfried Sassoon, that feels downright romantic. I guess it’s just obvious since the screenplay relies heavily on the words of its subject – both romantic and those used to protest the war – and also because director Davies is a visual poet. It tells Sassoon’s story with its typical formalistic and sultry style, elevating what could easily have been an ornate period piece on lingering trauma and living passionately as a closeted homosexual. Instead, it’s pretty fabulous. 102 mins. Now playing at TIFF Bell Lightbox. NNNN

I’m a newbie at Bob’s Burgers. The Loren Bouchard-created animated sitcom that premiered a little over a decade ago went under my radar. But aspects of the show are instantly recognizable from the other 20e Century properties like The Simpsons, King Of The Hill and Family Guy – house-style animation and cheeky satire to begin with. But The Bob’s Burgers Movie is also much sweeter and more affectionate, as if there’s a real concern for how this goofy, clumsy family of burger flippers keeps things together. The plot, which is about the burger family struggling to make rent while stumbling through a class-stressed murder mystery, picks up steam to fill multiplex screens. But the film doesn’t overdo it, keeping things low-key, fun, and heartfelt — exactly the right recipe. 102 mins. Now playing in theaters everywhere. NNNN

Someone threatens Tom Cruise with extinction in Top Gun: Maverick. Well, okay, they’re not threatening Tom Cruise – who defiantly withstood physical aging as he hits 60 and might just survive eternity on the serum Scientology feeds him – but his character Pete “Maverick” Mitchell.

At the start of this sequel to the 1986 Navy propaganda film, an Admiral played by Ed Harris insists on replacing pilots with drone technology. He runs humans dry while computers take over missions, telling Cruise’s insubordinate daredevil pilot that his species “is on the verge of extinction.”

He might as well be talking to Cruise, the actor and producer who insists on recording breathtaking aerial action with real humans sitting in the cockpits of the F18 Super Hornet. Doing things for real is Cruise’s mission statement, and Top Gun: Maverick is the latest monster flying the flag for his (and our) analog cause. Here’s the rare big studio movie where actors and stuntmen perform on location while using as little CGI as possible; a film where Cruise gets his hands on an F18, savoring its highly tactile quality in a deeply felt way. Read the full review here. 137 mins. Now playing in theaters everywhere. NNNN

A grandfather clock keeps popping up in Stranger Things 4. It’s the death knell for the new season’s villainous Freddy Krueger, letting out a haunting, elongated dong in the daydreams of Hawkins characters running out of time. If only the creators of Stranger Things, the Duffer Brothers, took this creepy recurring image seriously. If only they, too, felt time was a constraint. You may have already heard that the new season boasts the longest episode runtimes of all time for Stranger Things. You half-suspect these episodes are so long because Netflix just wants to boost its “minutes watched” stats with one of its most coveted properties. The new season stretches the most basic storylines beyond their breaking point. Read the full review here. Seven episodes are now streaming on Netflix Canada. NNN

Radheyan’s first assignment for NOW was to review heist comedy Ice Cube First Sunday. That was January 2008. Born in Sri Lanka and raised in Scarborough, Rad currently lives in Leslieville with his wife and two adorable children.