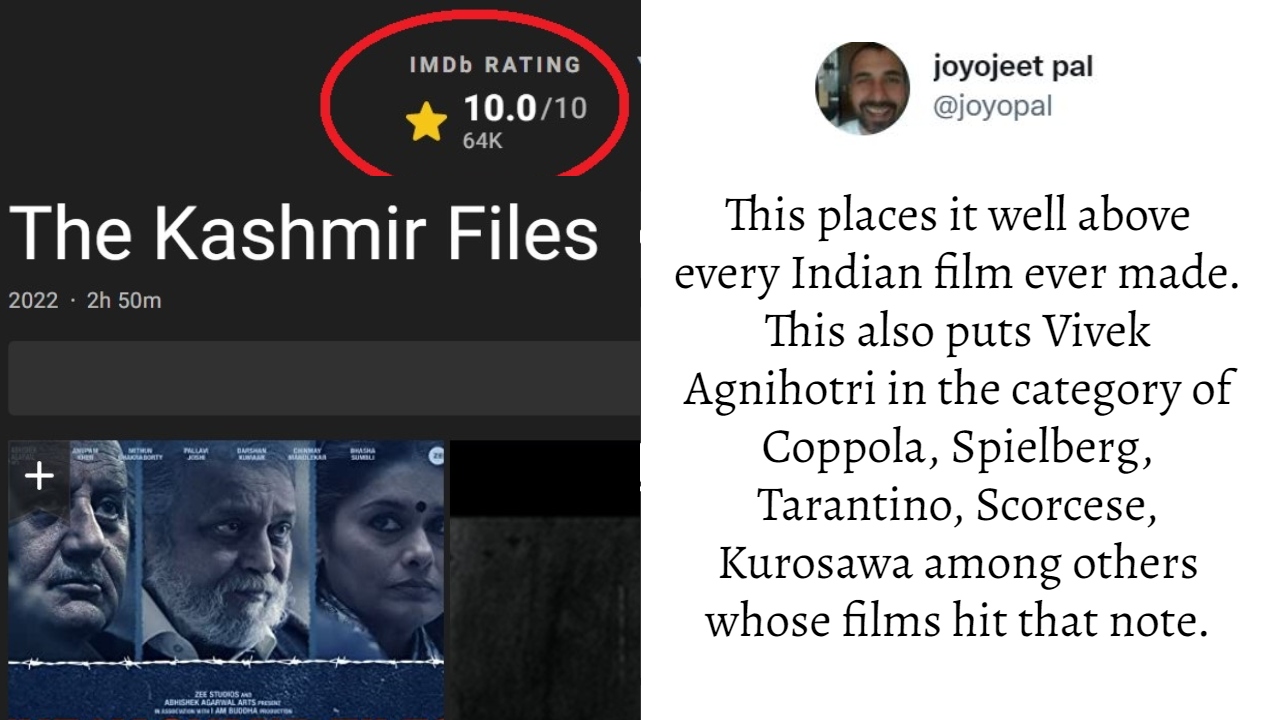 Indian Hindi language drama film, “The Kashmir Files” is positively received by the viewers and gave a phenomenal performance at the box office.

Previously, the film received a 10/10 rating on the IMBD website, which caused confusion in the minds of viewers.

Through a thread of tweets, a Twitter user alleged that IMBD ratings could be manipulated.

Are you looking forward to an Indian movie that won IMDB’s GOAT rating?

As someone who studies these things, we have only won the population war.

You can go watch Kashmir Files to confirm if this is the best movie of all time, or I can explain with data, if it helps, why @IMDB is broken pic.twitter.com/4F2l49INhX

In support of his claims, Joyojeet Pal wrote that the perfect rating puts the film far above all iconic films ever made, for example “The Dark Knight” and “The Godfather”.

See for example the comparison with Godfather and Dark Night, films highly rated on IMDB pic.twitter.com/iIXhyMveNp

This places it far above any Indian film ever made. It also puts Vivek Agnihotri in the category of Coppola, Spielberg, Tarantino, Scorcese, Kurosawa among others whose films hit that note.

This would lead to altering the credibility of the site to which people often refer before investing their time in watching a movie.

There is a precedent for this. Any film starring Deepika Padukone, Swara Bhaskar, Alia Bhatt and a range of others who are not obsequious or with surnames not preferred by the current political waiver will have their films rated aggressively on IMDB.

Alleging foul play in the film’s rating, he said several Southern superstars of Tamil and Telugu cinema had benefited from such boosting of their film’s rating by “fan clubs and public relations”.

It’s not the first film to do so. Southern Tamil and Telugu cinema superstars regularly benefit from fan clubs and public relations that systematically boost the ratings of their stars’ movies. This is arguably also true for media ratings focused on fan activity anywhere in the world.

Sharing screenshots of a few more facts, he wrote that those relying on IMDB should look at the “top 1000 voters” in the ratings section.

If you HAVE to trust IMDB, look at the “top 1000 voters” in the ratings section. This is almost always much lower than the mainstream rating.

The score, as well as the number of top 1000 who chose to watch the film are important.

Here is the rating of Asuran, a solid watch. pic.twitter.com/Mv2MvK6Hzf

Sharing his understanding of how movie ratings work, he tweeted:

On this metric, the highest-rated Indian mainstream film last year was Sardar Udham. Over the past five years, only a handful of Indian films have crossed that threshold – Kumbalangi Nights, Hindi Medium, Tumbadd, The Great Indian Kitchen and Newton. They are all fantastic films

It is worth mentioning here that at the time of publication of this article, only three Top 1000 voters have voted, which is too low to assign a value to the Top 1000 metric.

In a nutshell, this is how the information environment, especially around major consumer-loved products, is conspicuously muddy in India. pic.twitter.com/wp5NDVU0Ea

When we visited IMBD’s website it said they had detected ‘unusual’ voting activity on the film. Therefore, they applied an “alternative weighting calculation” and lowered the rating to 8.3 stars.

Highlighting this unusual activity, netizens claimed that the ratings were biased.

The actual average is 9.6 (bottom of the same page). Someone must have influenced the ratings because Jai Bhim, a propaganda film is still at 9.4
Who forced them to lower the grades of #TheKashmirFiles ? What is unusual voting activity? Isn’t it possible that every Indian charges 10*? pic.twitter.com/rnrg6YeCQQ

On noticing this change in ratings, the film’s director Vivek Ranjan Agnihotri, called it “unusual and unethical”.

THIS IS UNUSUAL AND UNETHICAL. https://t.co/Iwcc7yQCGk

To avoid any confusion, why not watch the movie and make up your own mind. Sounds like a better idea!