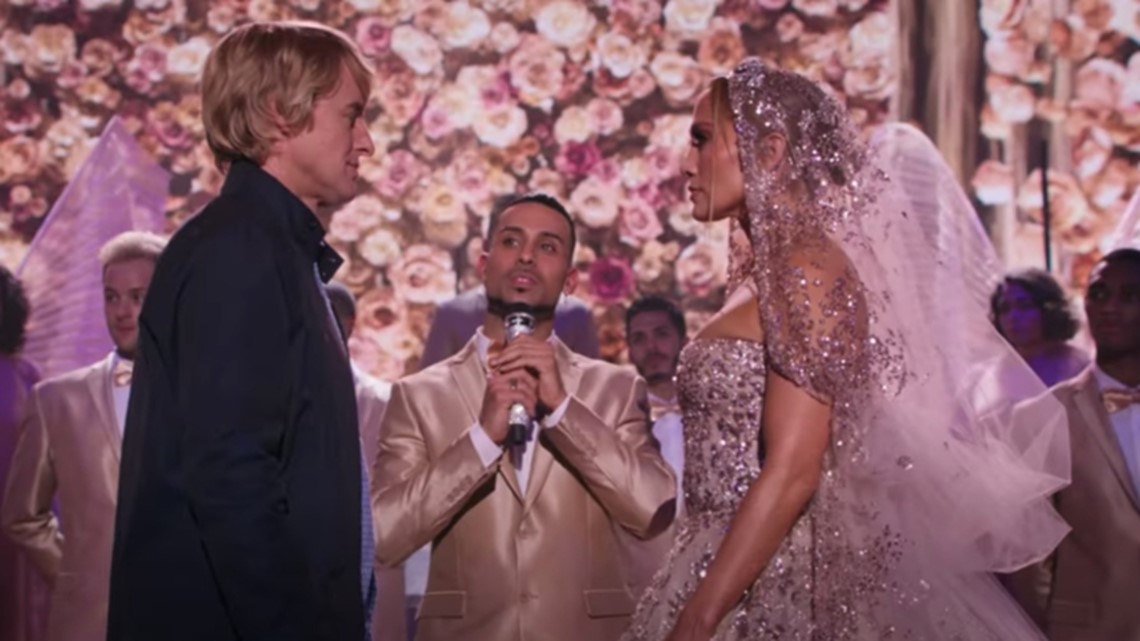 New arrivals put you in the spirit of Valentine’s Day.

DALLAS — Looking to get into the Valentine’s Day spirit? Or maybe you’re looking for a new cinematic adventure. Here are the reviews of the latest versions.

A cute encounter couldn’t get any cuter or bigger than this. In “Marry Me,” Jennifer Lopez plays an international singing star named Kat Valdez, who is dating another, played by Maluma. (They both have just a bit of real-life experience in this area!)

Their plan is to get married in front of a live audience with millions of others streaming. Well, just before Kat takes the stage, she finds out on social media that he cheated on her! So she takes a leap of faith and decides to marry a guy in the audience who is holding up a “marry me” sign. Dallas’ Owen Wilson plays him. He’s a single dad and third wheel at the gig trying to impress his daughter.

But what the hell, it’s Kat Valdez! So they do! She’s a superstar, he’s a middle school math teacher with a flip phone who knows nothing about the world he’s entered. Could this work?

JLo says she grew up on romantic comedies by Meg Ryan and Julia Roberts and, if you remember, did some of those herself in the 90s. She couldn’t wait to get back into the genre. It is also the first soundtrack she has ever made. The music is catchy. She’s more vulnerable than I’ve ever seen her in a movie, and it’s paying off.

Maluma is a natural in a limited role in his feature debut. Wilson is perfect as the shaggy nerd that grounds it all. Sarah Silverman as Wilson’s best friend, always a delight.

It’s a good movie – better than I expected – and perfectly timed for Valentine’s Day weekend.

I WANT YOU TO COME BACK

There’s another Jenny in the rom-com block, Jenny Slate! Her film opens with the love of her life, Scott Eastwood, who dumps her. At the same time, Charlie Day’s girlfriend (“It’s Always Sunny in Philadelphia”), played by Gina Rodriguez, decides they’re in a rut, and she dumps him too!

Misery loves company, and we have “I Want You Back.” Jenny and Charlie, aka Emma and Peter, hatch a plan to separate their new exes. She will move in with her ex’s new flame (a college drama teacher). He will try to convince his ex that she is a goalkeeper, even if it means training with him in his club. Abs are overrated, right?

It’s an ensemble cast, but Jenny and Charlie shine, they’re absolute magic as they drown each other’s sorrows and forge their own friendship. It helps that they work in the same building, and it all leads to one of the cutest rom-com endings in a while.

I would love to see a movie with just them in mind. By the way, SNL’s Pete Davidson and “1883” star Isabel May have cameos. You’ll want to check out “I want you back.”

DEATH ON THE NILE

Agatha Christie’s mysteries do not age and adapt well to the cinema. So, we have another one, and it’s surprisingly good.

In fact, no one should be surprised. Oscar winner (with a slew of nominations this season as well), Kenneth Branaugh is directing as he did another Christie mystery in 2017, “Murder on the Orient Express.” He also plays the incredibly observant detective Hercule Poirot, tasked with uncovering the culprit.

In this case, what is being done is murder aboard a Nile honeymoon cruise. The newlyweds are played by “Wonder Woman” herself, Gal Gadot and Armie Hammer, whose headline-grabbing real-life scandal is hard to put aside. Nice couple anyway!

They are joined by a cast of supporting players which includes Russell Brand and Annette Bening.

So how did they all get to Egypt and shoot this during the pandemic? Well, they didn’t. It was made in London with the help of sand and sun soaked desert visual effects.

As is Poirot’s trademark, he puts everything together at the end. At first, we find out what’s behind his distinctive mustache. What’s in the middle is quite nice.

“Blacklight” stars Liam Neeson, so you can almost guess what the film is about. He plays a weary government worker who gets agents out of trouble when they get too deeply involved.

His old wartime buddy (a white-haired Aiden Quinn) runs the FBI, and Neeson’s Travis Block follows his increasingly questionable orders. Government bigwigs may also have things up their sleeves. It all comes to light when Travis is tasked with extracting a young agent, who tries to get the boss out before getting himself choked. Will he be able to get his story to the press in time?

In the meantime, all Travis wants is to spend more time with his daughter and granddaughter. Yes, this man with special skills is a beloved grandfather in this film!

Look, Neeson is so much better than that, I don’t know why he takes on some of these roles. Paging Steven Spielberg. Do you remember he played Schindler in your classic “Shindler’s List”? Give this man a film worthy of his talents.